An email several months ago...

"Apollo went to our forever home to be a companion for my Dad. He lived alone for years and was heartbroken when his last beloved dog passed away unexpectedly.

Apollo had been wonderful for Dad.  He had not been able to bend over and tie his shoes for years. But with bending over and playing ball with Apollo, he could now tie his own shoes. Dad's spirits have been lifted with Apollo as a companion. Apollo has been a faithful companion, and he and Dad get along great!

Dad told us that Apollo has been the best thing to ever happen to him. Apollo will lead a very wonderful loving life. Thank you, Clancy's Rescue!" From the Daughter of Dad and Appolo

I received an urgent message, "Currently, there are 989 animals in our care, and more are coming in every day. Our shelter is at capacity. Can you help!" Indianapolis Animal Care Services. September 8, 2018

When you see this message, you sit up and take notice. An email came across my desk about a nine-year-old Border Collie that was in a high kill shelter. His owner had unexpectantly died a year ago, and he was placed in the care of a family member who no longer wanted him. Fast forward to the "Urgent Notice," he was scheduled to be euthanized in two days; they needed the room.

Clancy's Dream went to work because the owner passed away, and there was no one to take care of his dog. We contacted the shelter and got the euthanasia date postponed for a day. The next morning, I was on the way to Indianapolis, hoping not to be too late. It was the largest open kennel that I had ever seen; nearly a thousand dogs barking at once drowning out any conversation. Before I stepped into the room, the antiseptic odor that hit me was the strongest I have ever smelled, but it didn't cover the stench. Ten workers were working diligently to clean and scoop up waste, a never-ending task. You could tell the dogs had been there for some time because there was no emotion in their faces; the last dogs to come into the shelter would jump and try to get your attention, but it soon faded.

I arrived at Apollo's cage and looked inside. At first, I didn't see anything, but then I spotted a paw being raised as if to say, "please take me." My heart broke, and my mind was screaming, "how does this happen." I escorted him out; he was friendly, his tail was wagging, and he appeared to be happy to get out of his 3 X 4 concrete space. Something that doesn't occur too often, if ever. Little did he know that I could have been his executioner, and his tail would have still been wagging up until the very end; he just wanted to see somebody, anybody.

We went to a large office where I could evaluate him. It was brief because he was a keeper; you could just tell. No issues at all, loving, playful, and very friendly, but he was a mess. He had mats as big as baseballs in his fur and had a flea allergy. The fur mats were so thick they had to shave some hair and treat him with antibiotics. Every time he wagged his tail, he sprayed urine on me because he usually sat in it, but I didn't care. Apollo was going home with me, and we would find someone to love him. I whispered to myself again, "how does this happen." His original owner loved him and had raised him from a puppy; who would ever think that his dog would end up in a kill shelter with only 2 days to live.

When I left the shelter with Apollo on his "freedom" ride, I had to pause because this hit me pretty hard. I hung my head and asked myself, "what will happen to my dogs if something happens to Elaine and me?" When Apollo's owner passed away a year earlier, a relative was asked if he would take care of Apollo. This act sealed Apollo's fate, but not for the better... because no plans were made.

Apollo is doing great and living in a wonderful home. He was placed with an older gentleman who had lost his Border Collie, and a new match was made; both dog and man were made whole again. Since then, I have asked Elaine many times "who would take care of our dogs," and never had an answer came until now...

In the last couple of years, we have rescued more than 12 Border Collies, whose owners have died or simply could not care for the pet and they went to a shelter.  Last week, we picked up "Baby Girl," who went to an animal control facility when the owner passed away, and she went to a shelter.

This last Friday, Amy, was taken into Clancy's Dream. She had been loved and cared for by her family. She was her Dad's special girl, but when Dad passed away, and the wife went to a nursing facility, Amy had nowhere to go. She was taken in by family friends, a situation that did not last long. Amy, who was still a spirited young gal, quickly became a burden to this older couple. Shockingly, the husband told his wife that he would harm Amy if she was not gone by the next day! Amy moved again, where thankfully, these people contacted Clancy's Dream. 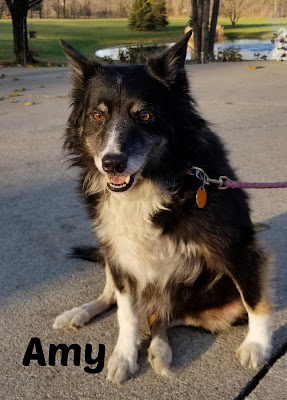 Today Amy is receiving medical & loving care, and she is on her way to recovery and a forever home.

Have you ever wondered what would happen to your dogs if something happened to you? I know I have, and we often think it would never happen, but it does. Nearly 8 years ago, a little Border Collie pup we had bred was in Florida, and the owner suddenly passed away. It was a shock to everyone and especially to the puppy. We were contacted, and the pup was flown back to us, and we found her another loving home.

Love Without End is an aftercare program that was started because of this very question, "Where will my dog go if something happens to me." When this concept was first brought up, someone said, "we save other Border Collies; why wouldn't we save our own?" From that, plans began to take shape, and now it is a reality.   It's not that the people who passed away didn't love their dog, no plans were made for their upkeep, and the dogs fell through the cracks.  Ken...

Love Without End Aftercare Program  will give you peace of mind and answer that question, "Where will they go."  Although there is a small one-time donation for any upkeep that will take care of immediate shots or health issues, we want to make it affordable.  A letter of intent will be given to you along with paperwork that you will place with your important papers for your POA or Estate Executive. If needed, they will contact us, and we will immediately take charge of your dog as if they were our own.  Peace of mind means everything, especially for the ones you love so much who can't speak for themself.