With having nine dogs that live in our house and three floors to clean, Elaine wants a vacuum cleaner on each floor.  To me, it is pretty simple to carry one to the needed location, but I do understand, not really.  Therefore, we have three vacuum cleaners to make her life more comfortable.  Last week one went out, and after years of dedicated service, it just quit working.  It was an excellent product but lived a life of misery and neglect.  It may have been because it was never emptied, and you can only get so much dirt and dog hair in it.  Several times, I was summoned to help because it "just wasn't working."  Kenny to the rescue and after taking the hose's apart and removing the underbelly of the beast, removing the circular tubes of hair clogging all the hoses, it seemed to work fine again.  "You know you have to empty the container, don't you?"  "Sure" was always her answer.

Last week one vacuum cleaner finally bit the dust, so a hunt for a new vacuum cleaner was started.  One day I was summoned to the TV area where the best vacuum cleaner in the world was playing on an infomercial, and it did EVERYTHING.  If you act today, you also get a Floor Steam Cleaner.  "Do we really need this?" I ask, and the answer was, of course, "YES."  Several days later, it arrived.  It was beautiful, and what we always needed.  The heavens opened when we took it out of the box and a Shark Rotator, Powered Lift-Away, TruePet Vacuum appeared.  It gets no better than this! 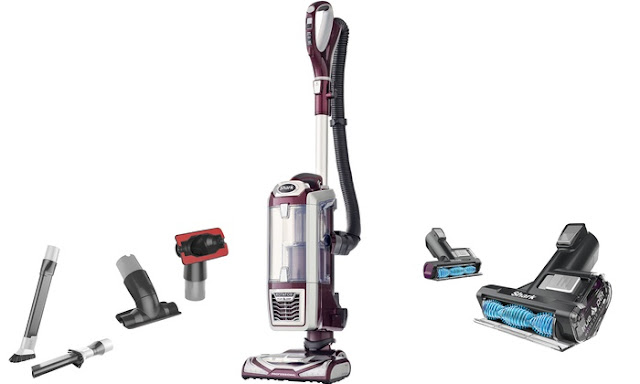 The day finally arrived, and the new beast was plugged in, and as I went outside to do some chores, the smile on Elaine's face was breathtaking as I walked outside, life was good.  Elaine soon walked out of the back door, "Can you come here? I think I have a problem!" Being in this spot before, I know this is either a really big or a tiny problem. OMG, what did you do!    Dear Mark Rosenzweig, Chief Executive Officer of Shark International.  I have a problem...

I went to the scene of the crime and where our decorative carpet was white, was now brown, and the smell was quite strong, to say the least.  "What happened, trying to keep a low voice!" I ask, "I didn't see it, and It came out of nowhere."  The scene appeared to be a scene of a crime with the amount of destruction that was thrust upon my eyes.  After further investigation into the massacre at the crime scene, "someone" had deposited a butt nugget, and it was run over by our brand new, just out of the box Shark Rotator Powered Lift-Away, TruePet Vacuum cleaner and smeared the soft butt biscuit across the white carpet.  Rather than clean the rug, it appeared that it was painted with a roller filled with Rocky Road ice cream.  Now we all have faced an occasional "accident," but it rarely happens here, and I mean rarely, and to think it happened when Elaine took out her brand-new Shark Rotator Powered Lift-Away, TruePet Vacuum cleaner that had never been used.

This is not a problem at all, just turn it over and wipe down the powerhead and voilà, good as new... Hey, it is new, brand new!  Once I turned the powerhead over, things went into the depths of hades, and I was standing with the devel.  "Houston, we have a problem, a big problem."  With fire in my eyes, smoke escaping from my ears and horns shooting out of my head, I turned to Elaine and said.  "Sweetheart could you NOT see that little brown mound on the carpet?" along with a big smile.  "I don't know, I was busy thinking about what else I can buy, any way you can fix it; I know you can; you're the man."

So out to the driveway, I went with our brand-new Shark Rotator Powered Lift-Away, TruePet Vacuum cleaner and a scowl on my face.  First thing first, take it apart, I thought.  I got the cordless screwdriver and removed the moving parts, including the duel beater bar and the Robot Side Brushes, Soft Velvet Brushroll, Floor Nozzle hose, Foal, and Felt filter and every piece that had never been used until today.  The poop sausage was the perfect texture to stick to everything, including dog hair that was also entwined in the butt brownie on every moving part.  After working on it for an hour, I got the water hose out, and power washed the butt cookie as far away as I could push it with the sprayer, but not before releasing the chocolate hostage out of the small crevice areas.  It couldn't be worse, and I had to use my fingers.

After cleaning it up as best as I could, I placed all the unassembled parts in the sun to dry, hoping the electrical components will work again.  After they were thoroughly dried, I reassembled the Shark Rotator Powered Lift-Away, TruePet Vacuum cleaner back together, and broke out in a sweat when I turned it on.   Miracles upon miracles it did turn on, and as I started across the floor, Elaine, in her cute ways, said, "want me to finish up?"  "no, that's ok, I got it, but thanks."   I wonder if it was planned?  Ken

This is a true story, every word is accurate...

Posted by Dogwood Ridge Border Collies at 7:26 AM