They say that every day is important in your life, but some days have meanings that will last a lifetime or longer.  On October 16, 2018, of this year, Nellie, Daughter of Clancy, and Dutchess was coming home.

During Nellie's lifetime, we would take our dogs to herd sheep with Nellie at Shady Creek Farm, where she lived with her owner Karen Newhall.  She was the star attraction and was envied by every dog and every dog owner.  She had flair and zeal in her work and took command of the ewes, lambs, and rams, cutting and dividing them into manageable lots for their transportation and health check-ups nearly daily.  She could run and separate them from signals that Karen would give her, doing precisely what she was told.  As a sheepdog, she was the best. 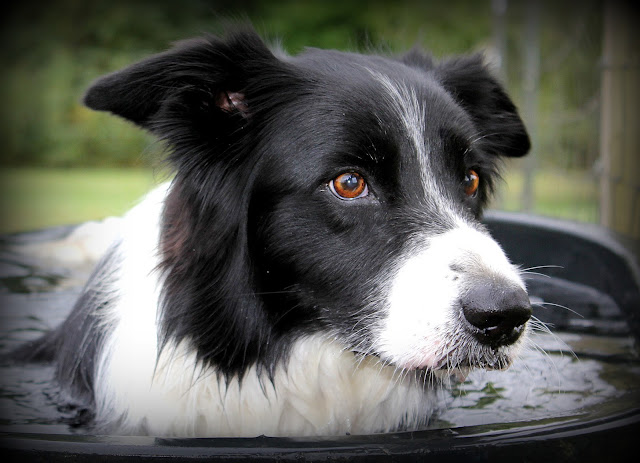 Nellie was more… She would work hard with all of her heart, and after each session of herding, she would always cool off in the water trough. After a quick soak and drink, Nellie would be ready for a spirited game of ball or Frisbee with her pals.  Not only was she good at her natural craft, but she was also a teacher and mentor for those dogs wanting to know and learn her skills.  She was in her element in the field with the sheep, no matter what the weather was, and was always ready to do her God gifted chores on the farm.

But, there is still more to this story…  Nellie was a natural Dock Diver and would sail off a Dock or diving board, showing everyone around her how it's done.  She was also a registered Pet Therapy dog with Pet Partners and was one of the first dogs to enter the doors at Riley Children's Hospital in Indianapolis as a Pet Therapy dog.

Nellie would comfort the children on the Oncology ward, helping them and their parents who were suffering so much. At times, Nellie was with them at the end of life visits.  Being a fixture for several years, Nellie was often requested by the children who would spend an extended time at the hospital, and she became best friends with "her" kids, and they patiently waited for her each week.
On one visit to Riley Children's Hospital, a Nurse came and asked:" can I steal your dog?" She took Nellie to a private area where only the Doctors and Nurses were allowed to go and laid down on the floor with her.  Because of her stressful day on the Oncology ward, the nurse felt overwhelmed and sobbed into Nellie's fur. Nellie always made a difference with everyone she touched, helping the lives of others.

Nellie was always associated with the farm and has come into the folds of Clancy's Dream. "The Nellie's Effect" has been formally set up through Clancy's Dream to be a driving force to help dogs with cancer and to assist their owner's through the treatment of this horrible disease. Nellie's second cause is reimbursing the fees associated with a Border Collie becoming a registered Pet therapy dog through Pet Partners.  Together Nellie and Clancy will spread their love and be able to help even more of our beloved breed.
Karen, the owner of Nellie, has spent over 25 years developing therapeutic medicines for companion animals, the last 16 years at Elanco Animal Health.  Elanco has a strong commitment to developing and nurturing the Human-Animal Bond through their business and as a social cause.  They are a corporate sponsor of Pet Partners and have cultivated an employee based group of registered pet therapy teams that serve central Indiana. These teams visit Elanco for events, and on days they are volunteering at places such as Riley Children's Hospital.  Nellie was a regular fixture at Elanco's global headquarters in Greenfield, Indiana, for many years.  Annie Peters, the CEO of Pet Partners, spoke at a recent Elanco event held in Nellie's memory and expressed Pet Partner's gratitude for the service Nellie provided.

Elanco's own CEO, Jeff Simmons, named Nellie "Elanco's Dog." He recently spoke about Nellie's service and how she has put a face on companionship at Elanco.  Because of the impact she has made with the employees of Elanco and her ability to provide comfort as an Elanco volunteer to the community, Elanco has generously given a substantial financial donation to Clancy's Dream, which will help fund the first wave of "The Nellie Effect."

One week before her death, Nellie made her last visits to "her" Oncologist's office; she was getting an ultrasound to check on her cancer's progress, which was not good.  While waiting for her appointment in the clinic's waiting room, another family was waiting for the news on there dog's end of life decision.  As sick as Nellie was, she walked up to meet the family and sensed they needed comfort.  After they had greeted her, she then followed them to a private area while their dog's life was ending.  She sat on the foot of the man whose heart was breaking and put her head in his lap, giving comfort even as she herself was dying.

Nellie's last hurrah was here at the farm.  Sixteen days before her death, she came to visit us for what we thought would be the last time.  Nellie appeared as healthy as ever, running and playing and jumping off of the diving board.  Even her mother, Dutchess, joined her, something she hadn't done for some time because of her age. 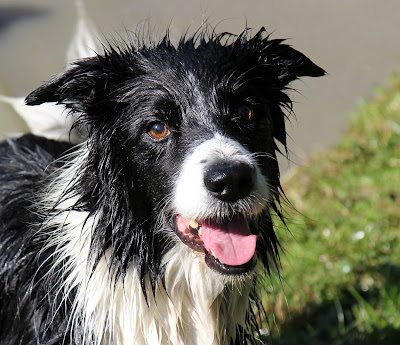 Maybe Dutchess knew it would be the last time she would see her daughter.  After the fun was over, we all went into the kitchen and attempted to get Nellie to eat, which she rarely did because of her stomach cancer.  Sitting on the floor with her, Karen and I tried everything and many kinds of food.  Tasting just a little of it, she again turned up her nose at it, wanting nothing.  Being upset, I started to cry, Nellie sensed my sadness.  In her usual way, she got up and walked to me and leaned into my body.  Nellie looked up at me, and I lost it. The tears began to roll down my cheek, and she put her head in my lap, trying to comfort me.  As sick and in as much pain as she was in, she was trying to help me, and we were trying to do anything just to get her to eat and feel better; she put us first as in everything she did.
On October 16, 2018, Nellie came home to the farm for good.  Knowing she was coming, I gathered my tools and put my work shoes on.  I traveled down that long road once again, making this trip three times this year.  Putting the shovel to the ground, I just couldn't start. 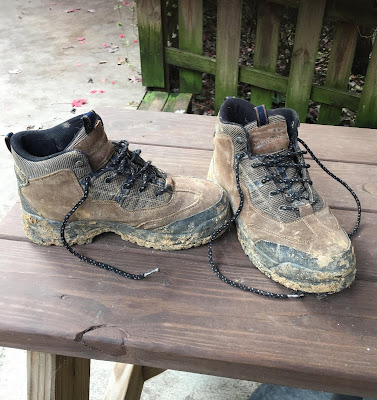 I sat down in the Adirondack chair and pondered why the good died so young, but there was no answer.  As usual, Dutchess watched and laid by the grave as she did with Molly, Abbie, and Clancy; something tells me she knows what is going on when I started.
When Nellie was laid to rest, she was with Clancy, and now their journey begins.  The sun was shining; the opening above the canopy of trees allowed the sunlight to shine on their graves.  In the quiet, the wind chimes in the trees began to tinkle, singing both sadness and joy of another of their own coming home.  We knew that anyone who knew our dogs would hear them speak, and Karen and I found solace sitting in the Adirondack Chairs talking about the best dogs in the world...   Rest well, my pups; we are who we are because of you!  Until we meet again and write the next chapter.

After Nellie's death, she became part of Clancy's Dream.  It was only fitting she be buried next to Clancy, where they will travel together "Bringing Help and Hope to Border Collies and their Owners in Times of Need through Rescue Efforts or Veterinary Care Assistance."

"Dad, I'm here," Nellie shouted. "I know," Clancy said, "I have watched your struggles, but now you're pain-free but have a new job," Abbie came running to her family with a Frisbee in her mouth; a new journey had started.  Not only to help Border Collies find new homes but to help promote the Human-Animal bond through Pet Therapy and help families and dogs fight cancer. "The Nellie Effect has started.   Ken...