Friday night, I was sitting in my chair and thought about Jackson, a Border Collie that was in a shelter in Kentucky.  Earlier in the week, I was notified by several tags and emails that stated he needed help because he has been caged at a kenneled for two months, imagine what this can do to a Border Collie! Unknown to him, we were on the way.

“Jackson - NM border collie, 5 yrs. Old, 62 lbs. Found as a stray on 8/29. Jackson has been at our shelter for a LONG time. Jackson came in very matted with burrs in his coat.  Jackson has little time left before he is euthanized. He is a very smart dog and wants badly to be safe and loved.”
This very weekend, Clancy’s Dream is doing two evaluation on dogs that need help.  The dogs are in a situation that is not suited for a Border Collie and is having a problem coping, and they are having issues, this is a typical story in their world which can cause a multitude of problems.  Also, 4 other dogs are needing to come to us this week.

Every dog in every shelter has a last night in that shelter, and everyone is preparing for it but in very different ways when that night comes.  In Jackson's case, after an evaluation, Clancy’s Dream submitted the paperwork necessary to get him released.  Transportation to a foster needs to be arranged.  This in itself can be difficult because of the locations of all the people involved.  Dates need to be set, and schedules need to be cleared, cars gassed up, directions printed, forms filled and completed by Clancy’s Dream and by the shelter.  On the shelters end, medical evaluations, shots, surgery, exams, tests, and grooming.  Everything needs to be coordinated for one pick up, and this is with every dog.

The next day is the big day, everything comes together, and all is set for the new life for the dog whether it’s the transporter coming or the something else.  The transported drives to the shelter and at times, it’s 2 to 3 hours away, and some transports can take 8 to 10 hours one way.  The animal shelter will assemble paperwork, forms and contact us to reaffirm the arrival.  Everything is checked, and double checked with a lot of people working to coordinate the plan.  Messages are sent timetables set and kept, and everything goes as scheduled.

Jackson arrived safe and sound in the arms of Clancy’s Dream Saturday afternoon.  He walked around smelling trees, never running or playing.  Jackson has all but shut down and given up hope.  Last night he refused food and was content in his kennel where we feed all the dogs.  He had to be coaxed out with a lead and sauntered back inside the house where he laid back on his dog bed.  Hopefully, the spark will ignite again, and he will come around.  Jackson is the spitting image of Clancy, pricked ears, same markings, large head and piercing brown eyes,  and even a half collar.  As I sat in the kennel with him, I wept as I stroked his head.  How does this happen… 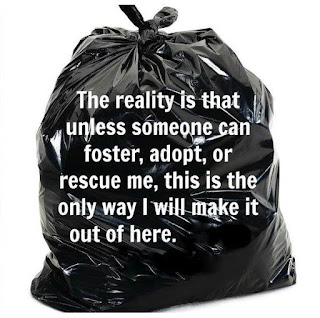 Unfortinially, the dogs in a shelter are all not adopted but the last day has come and gone.  The cage is cleaned and sanitized, ready for the next dog.  Freshwater and food are placed in containers for the dog that is already at the kennel, and the countdown begins.  In every shelter, many dogs are spending there last night in a noisy, smelly place, not knowing what tomorrow may bring.  You decide where that will be…  Ken

Posted by Dogwood Ridge Border Collies at 8:59 AM