Here at the farm, we were lucky enough to have a family living with us for nearly 13 years.  They were fun, loving, energetic and very comical.  We had wisdom in the father, love was taught by the mother and many antics from the daughter, and now our family is gone, and it has left a hole in our heart and affected our very souls and the dogs around us.

We lost Clancy the Father several years ago, Molly the Mother and Abbie the Daughter in the last few months.  You know the story with Clancy and Abbie but now is the story of Molly Mae.

Several months ago, we took Molly in for some test and bloodwork, and she is terrified of car rides.  The x-rays revealed there was a mass around her spleen.  The bloodwork was okay, but there was the mass.  As I was leaving the receptionist had overheard our conversation with the Vet and said her dog has had the same thing, and they chose to operate and the pet only lasted 5 weeks. 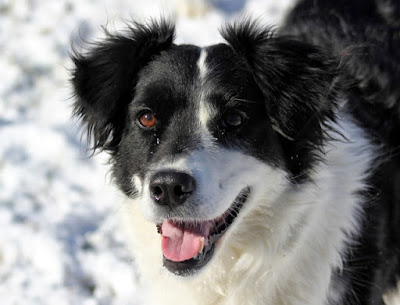 Several weeks later, Molly decided to stop eating and had not left her dog bed for nearly two days.  She was very subdued and showed no interest in anything.  Her stomach was extended and she was in pain.
One of the most frequent questions I hear from people with a sick dog, when is it time?  The best advice I ever got was from a Vet, “you’ll know when it’s time,” and I did. 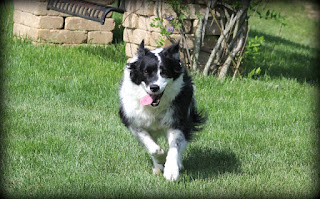 We were lucky enough to have a Vet come to the house to check on Molly, I knew the news was going to be bad, but you always hold out hope.  Molly hated car rides, and someone would have to ride in the back seat with her if she went anywhere and I didn’t want to put her through it again.  When I met the Vet at the gate, we walked to the house.

When we reached the house, Molly was standing at the back door, I looked at the Vet, and before I could say anything, she said: “a rally does not mean they are better.”  After an examination, she confirmed that her chest was filled with blood and she was struggling, it was time.  We all walked to Clancy's grave where just a few weeks earlier, Abbie and I said our goodbyes.  As I spread the blanket down, I sat with my legs open where Molly curled up in-between my legs.  As soon as we were comfortable, Dutchess, Molly’s arch-rival came and sat next to us and in my heart, I believe they both knew, Dutchess was as close to us as she could be and at one time reached out to Molly with her paw.  After all, they are half-sisters born only two weeks apart.

As the medication was administered, Molly and I were looking at each other, and as it went into her veins, I bowed my head and took her last breath as I did with Abbie, Molly was gone from this earth but pain-free.  My work was just beginning, and I ask the Vet to leave.  Her grave was dug, and I brushed her hair and took clippings to add with Clancy and Abbie to be buried with us, along with all our dogs.

After Molly was inturned, as usually I sat in one of our Adirondack chairs by our revered place and pondered our life together.  Meggie and Dutchess were part of the original 5 dogs we had at the farm.  There always seemed to be a bond between all of them, and they played and worked together and were very close.  As I was sitting, Meggie laid quietly and watched while Dutchess stayed by Molly’s grave. 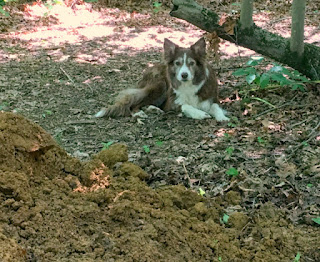 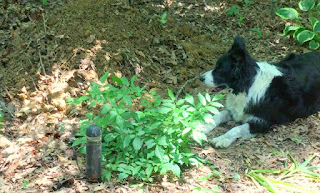 In the dog world, we will never understand what they think and why they do some of the stuff they do.  I believe they are far smarter than we will ever know.  With the dogs I see, I suppose I just get a small glimpse of their world, but someday we will know.   The little family of Dogwood Ridge is no more but are buried together under the tall trees, where the sun shines through an open canopy with wind chimes that sing where I often sit in the Adirondack Chairs and think about the best dogs in the world and often speak to Clancy Man, Molly Girl, and Addie Dabby Do…  Ken

“He’s here… HE’S HERE!” Abbie barked, and she grabbed her Frisbee and spun circles of excitement.  “He’s almost across the bridge, hurry!”  “In time child,” Clancy said, but as Clancy and Mollie walked toward the bridge with alert ears and bright eyes, they knew it wouldn’t be too long. 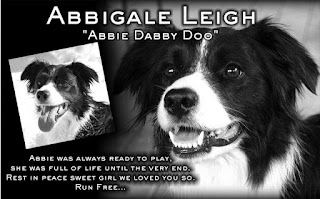 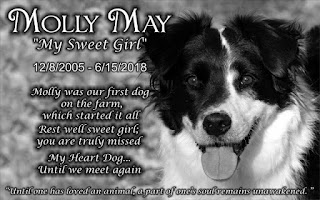 Posted by Dogwood Ridge Border Collies at 8:24 AM