Don’t ever teach your dog to bark.  Many years ago, when Dutchess was very young, I taught her some tricks.  Not too many just enough to get her into trouble, and it does most of the time.  Last Thursday night, I was sitting at my computer reading the news when I heard that familiar sound.  Woof… woof… woof… came the sound from the back door and I knew exactly who it was.

Every bark was the same, but when no one responded in a timely fashion or as quick as she wanted, it would go up an octave or two.  Not knowing I could see her and watching and at times she would lay down and bark, not giving it as much energy.   It one of those barks that you think will stop, it’s not too loud, and inevitably it will end you think, but it doesn't because she wants in.

When Dutchess was young, she wanted everything (and she still does), and I mean everything.  She would shove everyone out of the way when it came to snack time, not in a mean way but she felt she was entitled to it all.  Usually, it was never a problem because she did it with a smile on her face, and everyone would say, “that’s just Dutchess.”

When I taught her tricks, she was very good at paying attention as long as there was a reward after the fact.  I taught her to sit, down, shake right hand and even shake left hand.  She was great, but she saw things a little different than I did.  As time passed, and she was in a hurry to get into something the treat, I notice that when I would tell her to sit, she would keep going through the routine.  She would “sit” but immediately lay down and then sit again raising her right paw and then her left.  Barking after each trick the whole time, I assumed she wanted 5 treats because she did 5 tricks all at once without being asked, she just cut out the commands because to her, it’s not the tricks, it’s the treats.

The barking has expanded to other areas in her daily routine.  When she is out, and we have a ball or Frisbee, she’s fine if no-one gets it from her.  If they do and they hole it without playing, she’ll look at me and will bark.  It not a lot of barking but it’s as if she is saying, “I want THAT, give it to me.” 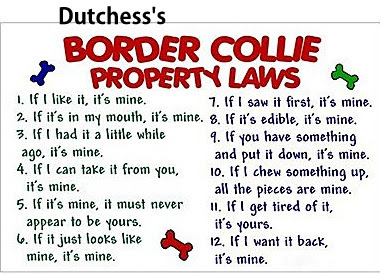 Giving her a voice is something that Elaine warned me about.  While it is cute as a button, it has stepped up her communication skills drastically, and I really think she knows what she is saying, Dutchess is the smartest dog I have ever met.  While she is short on skills, where I see her excel, is that she can communicate and tell you what she wants by the bark, the intensity, and importance of her request, it’s also the way she will look at you, making eye contact and re-focusing on the desire or object.

If Dutchess had been with someone who worked intensely with her, there would have been no boundaries where she could have gone.  She knows what she wants but also knows how to get it, and in my heart, if she had thumbs to turn the key, she could drive herself to the story for more treats.  She is quite the character but don't ever teach your dog to bark unless you’re prepared to be entertained and actually talked to…  Ken

Posted by Dogwood Ridge Border Collies at 7:40 AM