Today's post is by guest author Catherine Battersby.  She and her husband moved back to England after a successful teaching career in the states last year.
"Xena, Clancy’s daughter, and Jack, Clancy’s grandson moved home to Clancy's beginnings…
Little did we know that Clancy’s pups would be moving back “home” near Worcestershire a county in the West Midlands of England.  The place where it all started.  It truly is their home because for the last 10 generations this was where “home” of his family was started."  Ken Shuck

Ken often says "anything can happen with dogs, and he is so right. We only have two, Xena and Jack; but they keep us busy." 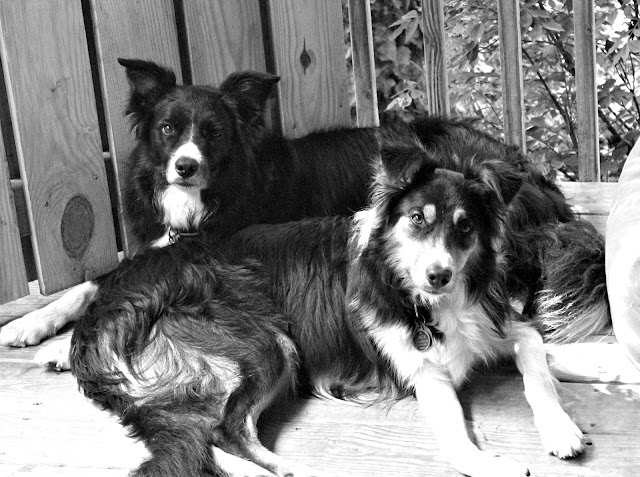 Xena and Jack are pretty easy, as collies go: good on recall and “the basics,” they will fetch and drop and can be called off other animals. Every once and a while in Indiana they would flush a deer, and they would come right to us if we called them and said, “No.” So this isn’t a blog about anything you can train for; it’s about a freak accident that might raise awareness about (yes) sticks, and acting fast if your dog acts unwell. When in doubt, go to the vet.

Just two weeks ago, we were up on the hills. The dogs were, as usual, off lead, scampering around exploring, meeting other dogs, snuffling in the bushes, running on the turf. Xena bounded away from another dog, then turned because she had seen something. She trotted over to a stick, sniffed it, and picked it up. (This is important: she was not running full on into it, and no one had thrown it for her or at her.) She yelped hard and dropped it.

I was concerned because she sounded in pain, and went to check the stick. It was a light one, with a number of branches on it. Nothing seemed freshly broken, but Xena was coughing a little. I checked her mouth; no bark, no blood, no pieces of stick that I could see. We walked on for a bit because she seemed in good spirits, though she coughed a little a few times. She had after all only picked up a stick and dropped it. I then saw that she was drooling, so I took her home. Once inside, she lay down and looked a bit sorry for herself. If you know Xena, you know she has perfected that look, so that didn’t concern me too much. But she was still drooling and coughing a little. No blood. I got a small piece of sausage and offered it to her. She tried to take it but then dropped it. That was the sign of real trouble, so I read some online reviews, picked a practice, and called a vet. All within 5 minutes.

We were lucky. The vet was great. He took me seriously, asked if I had been throwing sticks (I hadn’t); asked if Xena was gagging or coughing (she was), and we again checked her mouth. He couldn’t see anything either. So he said he would have to sedate her and see what the problem was. I agreed and went home. Two hours later they called me to say she had done well and was awake, and could I come down to talk with the vet. They wouldn’t tell me over the phone what had happened. That’s never good.

When I got down there, the vet showed me everything. And I mean everything. The stick had gone in under Xena’s tongue, where there was a ¾ centimeter hole. But that was just the beginning. They found that there was a further 4-5 inch “tunnel” down her throat where the stick had pierced, somehow missing nerves and the carotid artery. The vet had had to flush it through with a catheter (creating an opening further down her neck) and hoped he had got everything out. He had taken photos and showed them to me. We observed her for about 12 days, and it turns out he had cleaned everything, and she is fine.

But Xena still wants sticks. I had thought it was OK for her to chew on them if I didn’t throw them for her; now I know that really freakish things can happen. But even a smart collie
has the intelligence of a two-year-old and the emotional intelligence of a toddler. So walking a collie is like walking a toddler with massive emotional energy and mad gross motor skills. And Xena still wants sticks. So we walk with more toys now, and I continue to train her off the sticks. She will drop a stick if I tell her to do so, but she still picks them up, and if we walk past a place where she dropped a stick a while before she will sit down by the stick and beg me to pick it up. This will never be easy.

I know things are going to happen, no matter what we do. If you have had human kids, you know they are going to make swords out of sticks and not only have mock sword fights.  Despite your warnings not to poke each others’ eyes out, but also these sword fights will at some point outside your field of view take place on swing sets and while the kids slide down slides.  Same with dogs. I grew up with dogs at a time when we fed them in the morning and then threw them outside for the day. I am sure they ran through the woods grabbing sticks and eating sh*t and fighting with other animals. We had one Belgian Shepherd/collie mix who routinely ran away and came back with a snout full of porcupine quills. (My parents I think ended up keeping a few Valium on hand for every time this happened; removing quills from an undrugged dog is not fun.) Anyway, we all now watch our dogs much more than we ever used to, much as we all watch our kids more than happened in the 50s and 60s. Is this good or bad for development? Who knows? Does it keep them safer? A bit. But stuff still happens.

Some things they won’t learn. The picture below is Xena 96 hours after getting the stick five inches into her throat. You can see from the look in her eye that she is raring to go. But she also has been told “Drop” and “Leave” and has responded. Honestly, she knew this before or she wouldn’t even listen to me now after everything that happened. But she still wants to try it, and the accident happened even though I have been training both dogs off sticks ever since the first article in the UK press came out about two years ago  BBC UK News . The dog I mentioned above went after porcupines all his life; in fact, the vet said that once smart dogs find a challenge, they want to beat it. 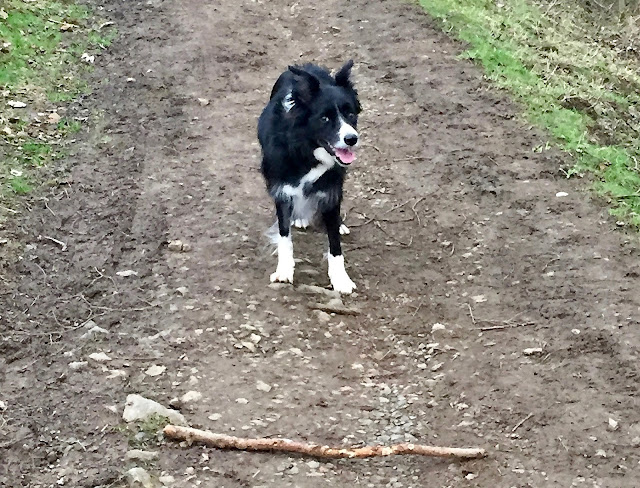 As I was walking the dogs down the hill this morning, I saw a very happy, well-behaved, and obviously cared for Border Collie trotting along with his family, proudly carrying a big stick. Did I say anything? No. Should I have? I don’t know. I do know we only have our dogs in trust for a little while, and we can’t protect them from everything or become paranoid parents, but we can love them and be aware. And if the dog refuses a sausage, get him to the vet.  By Catherine Battersby.

Posted by Dogwood Ridge Border Collies at 8:05 AM