What to say… it’s been nearly two years since Abbie was diagnosed with Lymphoma and was given weeks or months to live at best  I remember that day so well, and it is etched in my mind forever.

“This past Tuesday, I made a trip to Louisville with Abbie.  The road trip only lasted for part of the day, the mental journey will last my lifetime.  Abbie has inoperable cancer and is dying of lymphoma.  Everything was confirmed at the Oncologist’s office in Louisville from a complete exam along with many tests, and it can affect any dog at any age… During the entire trip in the car to and from Louisville, she sat and watched me with her big black eyes and would paw at my arm as a signal for me to touch her which I did.  Even at the Oncologist’s office, she jumped in my lap and peacefully slept as I stroked her face.  In my blog last week, I talked about my walk with Abbie in the early morning hours but what I left out was that I cried like a child most of the time.  She stayed by my side wondering what was wrong, trying to fix me in her own way, little did she know, I was trying to fix her but I can't.”

For those that didn’t follow our travels, she had stage 4 cancer, and we needed to make a decision of what our next step was.  Two choices, the first was to do nothing and let it progress knowing she would die within weeks, months at best.  Second, we would put her on a weekly Chemo therapy IV for nearly 4 months.  We chose the second.  It was expensive, time-consuming and very hard on her along with a reaction to her veins in her legs.

I had to drop her off for her treatment, and she got to where she didn’t want to get into the car and neither did I.  She would sit on my lap in the office until they were ready for her.  She knew what was going on and when the door opened, and they looked at me, she seemed to get a tighter grip on me but knew it was time.  After she jumped off my lap, she would look back at me with her large brown/black eyes and one at the door, she always stopped and paused looking for help, and there was none, and that part killed me.  If only I could go back with her but couldn’t, I felt helpless.

When you start Chemo, it’s never sure of anything or results are not guaranteed, but we tried.  After a few treatments, her veins in her legs began to have problems, and she lost her hair on her legs, and it scabbed over requiring homemade socks to keep her from licking which seemed to work.   At the end of 13 weeks, she went into remission, and we said “no more.”

After we decided that we were done, it was February, and I just wanted her to live for one summer so she could swim and jump in the water one more season or at least part of one, I wanted her to have one last fling.

Abbie is the most active dog I have ever seen.  She can be in a dead sleep, and the word play will arise, and she is up in a gallop looking for something, anything, to carry running toward the lake at full speed with everyone following.

It has been 18 months since her last Chemo IV treatment, and she is as good as ever.  She seems healthy, happy and still herself.  She sticks at close to me like Velcro and will not let me out of her site, and if she is laying on the floor at my feet and any other dogs get close, she hops in my lap and snuggles for all she is worth.  When we visit the Vet, he always reminds me that it will return and return with a vengeance. 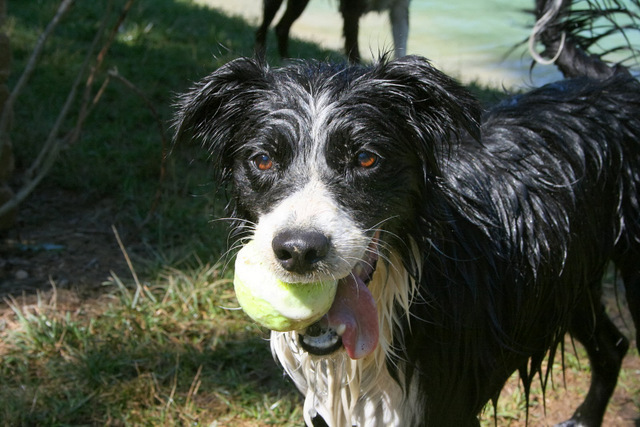 I know the other dogs don’t understand, but while we have Abbie, she gets an extra snack, extra play time and even private time in the lake, chasing her Frisbee.  At times, we have taken “just” her in the car for a short trip to an open field where she can run until her heart is content without sharing any Frisbee time with her playmates.  We have been blessed with her longer than expected but I am sure the others understand and know I would do the same with them.  She is my little Abbie Dabbie Doo, and I love her so.  What she doesn't know, she gets a Chemo treatment three times a week in pill formula.

Just last night, Dutchess got to play with her during one of our special times, and they had a ball.  Fortinially, we have had some time to fulfill her dreams and wants. 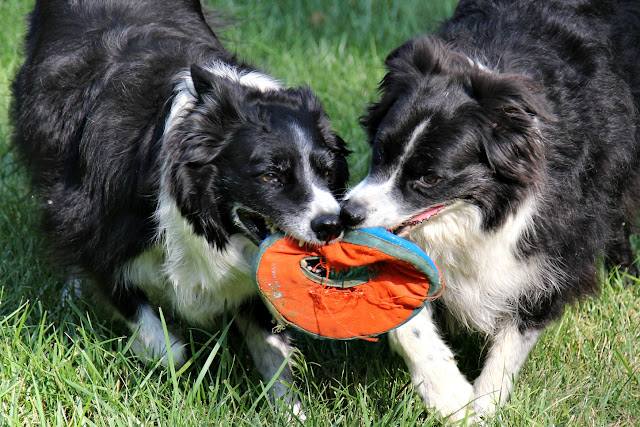 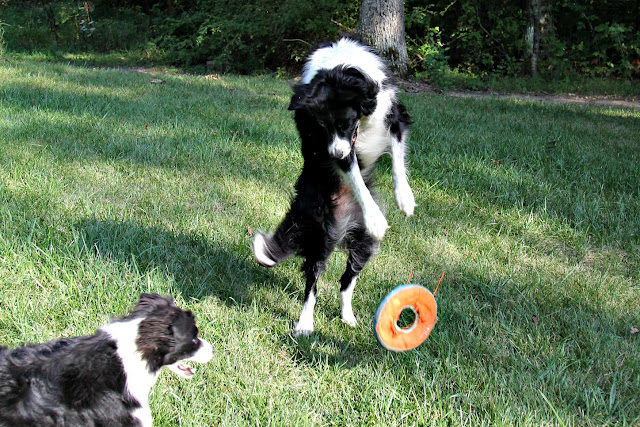 On a daily basis, I check for the return of her Lymphoma and so far, so good.  Make time for your dog, they depend on us to make their life complete and happy.  Nearly every day I will rub all of them, their head, scratch their butt, hug and kiss them and if you don’t, one day you may regret it and wish for more time… We got it with Abbie…   Ken
Posted by Dogwood Ridge Border Collies at 8:18 AM