Does your dog do this?

It has become a routine here at the farm.  When we eat any meal off a plate, the dogs will gather around and wait their turn, except Dutchess, she will sit, but she will bark every 10 seconds or so, and this was the case last night.  They know their reward and wait patiently until we're done.  We've tried to coordinate it together, and after getting finished, it's party time.  It's not what you think, there is no mad rush to "get" to the treats.  One by one, they get their turn to lick the plate.  It's so funny, each one is different and has their own technique.  Some will gently lick, and others will try to lick as fast as they can, and I bet you know who that is.  I am ashamed to say this because some, including my Mother, think this is the most disgusting thing in the world.
It always happens here on the farm, as I get ready to relax and get into the hot tub, the dogs seem to know where I'm going, maybe it’s because I have very little on and I am going outside.  Everyone runs for their spot around the tub, and Abbie always jumps on the corner of it and sits pretty.  It’s usually uneventful except when someone wants to get in… 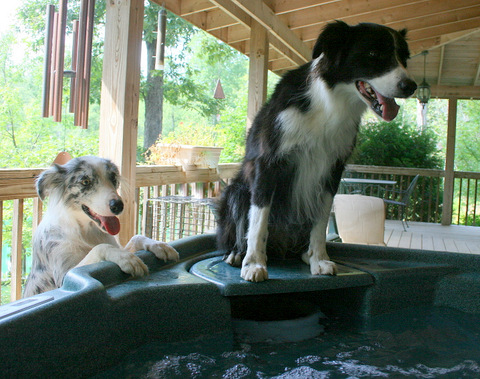 As I sit, I have always thought about “Why do the dogs want to lick me” because they were doing it even as I was sitting in the warm water; Doc had jumped up behind my back, putting his paws on the side and licks my ear.  Not wanting to be outdone, when I changed positions, both Abbie and Dutchess were licking my face, Dutchess on one side of my brow and Abbie on the other and I can tell you, Abbie is soft, and Dutchess will lick your eyebrows off, but why do they do this.  I always thought they wanted water or the salt if you’re sweating, but I have found out that’s not always the case…
According to the Pedigree website.  Why is a dog licking?  Right from birth that is how the Mother communicates with her new puppies, how she stimulates them to start breathing and how she cleans them when they are born, so it's very important to the survival of puppies.  In the wild and in domestic dogs, you'll find they will lick around the Mother's mouth as newborns and puppies still retain that instinct.  It's also sort of a submissive gesture — the more subordinate members of a pack will lick the more dominant members and that's important in maintaining pack harmony. 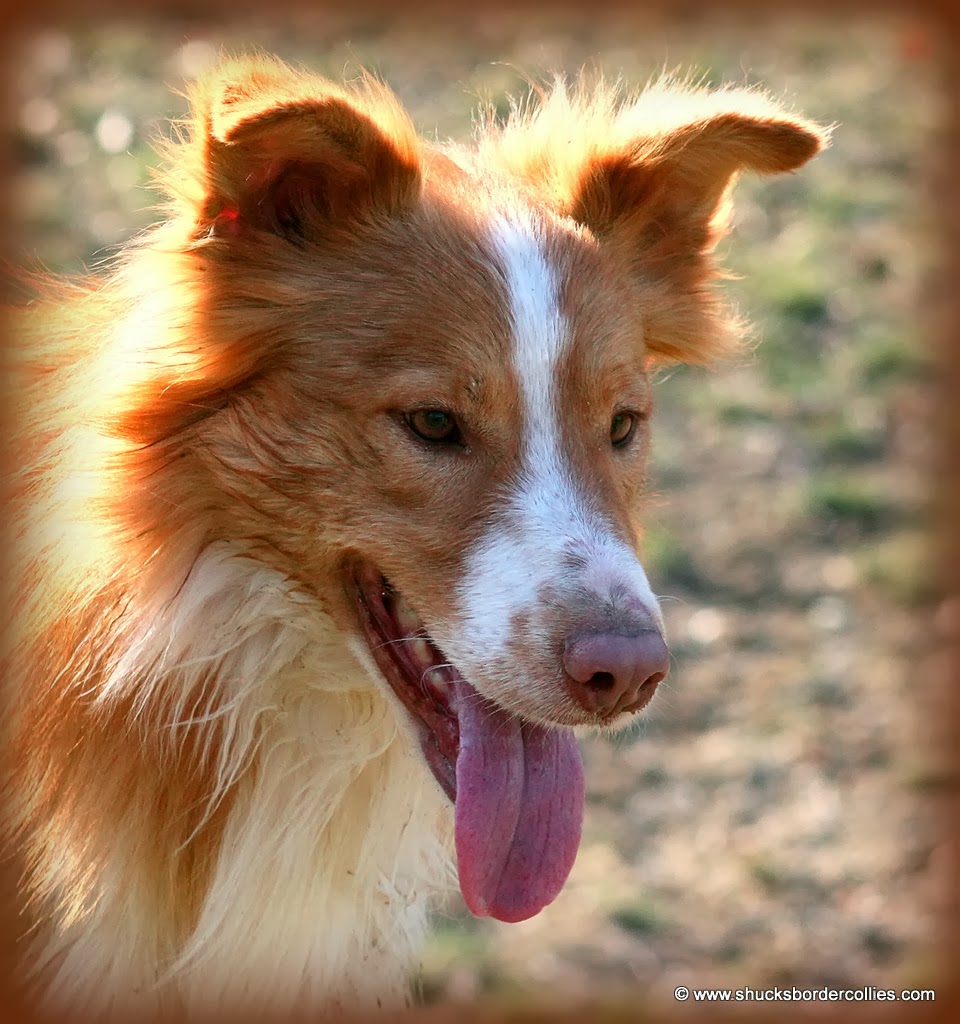 I can say for sure that this is true.  With the pups that have been born here, it always a lick fest.  Even to this day, Annie and Meggie will lick Molly wanting her attention and will submit to her while they are doing the licking, and yes, Molly is the dominant female.

According to the Pedigree. From about six weeks of age, some pups lick their mom's face and lips when they want her to regurgitate food for them. This behavior is a remnant of their wild ancestry—it was easier for the Mother to carry food in her stomach rather than dragging it back to the den in her mouth.  As puppies grow older, they lick to groom themselves and their pack mates. It also becomes a way of welcoming others back into the pack and increasing the bonds between pack members.  Adult dogs lick as a sign of deference or submissiveness to a dominant pack member. The dog doing the licking usually lowers its body to make itself smaller, and looks up, adding to the effect of subordinate behavior. The dog receiving the face licks shows its dominance by standing tall to accept the gesture, but doesn't return the favor. 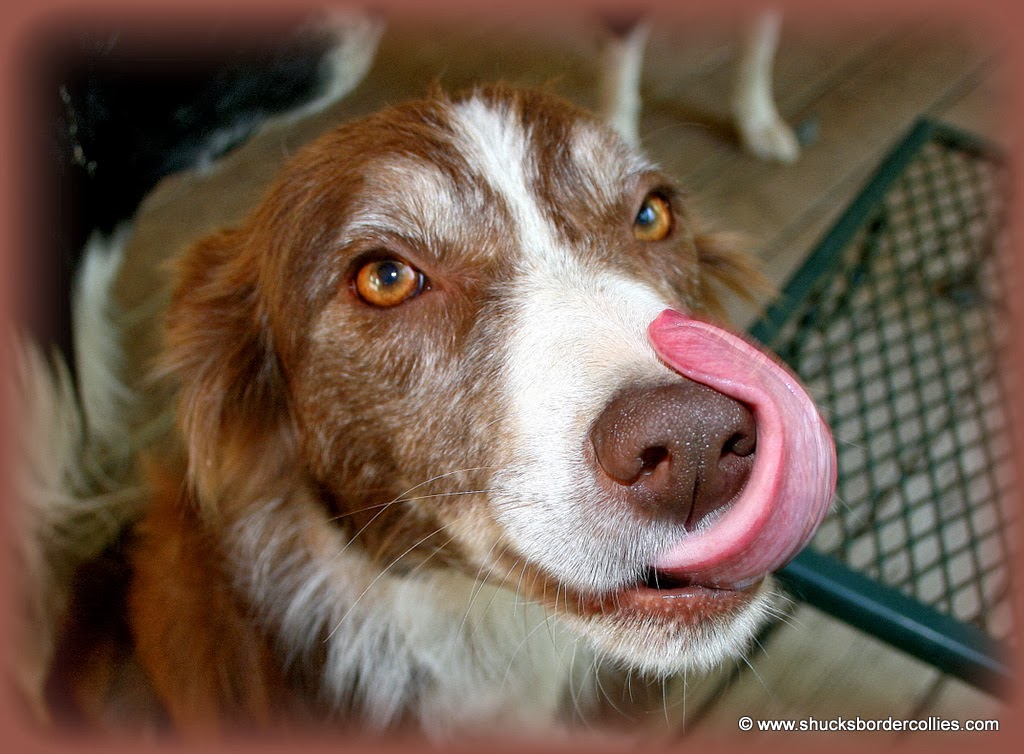 As I think about this, I remember a time when I thought it was a horrible thing.  I remember seeing a dog lick a person's hand, and I thought it was gross, and I was reminded of this statement as a dog was licking my leg while I was wearing shorts.  I only remember it felt so good, and I was disappointed when he quit and how things have now changed.
When your dog tries to lick your face, you might have a better idea of what he's trying to communicate.  He may merely be letting you know that he's glad to see you.  Or he may be hungry and asking for a snack.
But can his enthusiastic licks also represent a sign of affection?  Here's one way to look at it.  A dog's behavior can be encouraged with positive reinforcement.  So if a dog licks his owner's face—either out of instinct, anxiety, or just because his owner's face tastes salty—and that action is greeted with positive attention, such as hugs and human kisses, he'll want to repeat the behavior. While it's probably not a "kiss," you can bet it's a sign that your dog thinks you're pretty great.  Once I was working on the farm and was hit on the leg with a large piece of wood, and while holding up a thick board in the air trying to nail it in place, Clancy started licking the wound, and I just knew it would hurt, but when he got to the injury, it felt better and cleaner.  Now, I don't advocate this and might not allow it again, but is there more here?

Affection?
Love?
Adulation?
Healing?
Submission?
Admiration?
Or do they want to get in the Hot-tub? 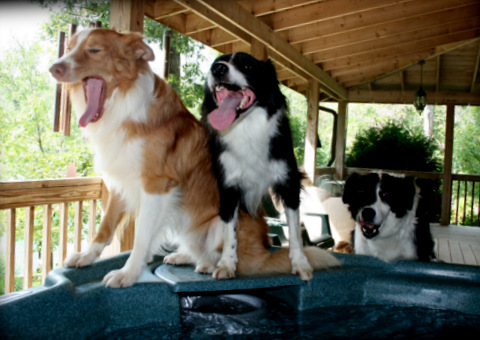 Or all the above.  I can’t think of any other animal that lends itself to another person or animal with a cold nose and a wet tongue flopping from side to side, ready to clean out your ears, nose, or heal your wound…and I wouldn’t have it any other way…


And just think, we thought it was just a lick…Ken