The Dreaded Cone of Shame?

Many times we think of the Cone as a symbol of “shame.”  In our house, it is anything but.  We are very familiar with them and have several on hand because of the activity that goes on around the house and property.  Here It’s usually a badge of “honor” because of the feats that they do to get their Boo Boo.  My dogs are the “Evel Knievel” of Border Collies you could say, and I’m surprised that they do not have more.

Back in September of 2012, Abbie was in a cone for who knows what.  For me, the injuries seem to run together, or it’s an age thing, I just know they love to run, and I try to pick up the pieces.  Now I really don’t care if they do run, I just want them to be careful because we've had had many vet trips for sutures and x-rays, and nearly every one of our dogs has made that journey.  Sometimes they will run into each other, nip at each other and even run into anything or everything.

“Over the river and through the woods to grandmothers house” is a beautiful verse to a lovely song, but with Border Collies, the through the woods part scares the bejeebers out of me.  I've seen them run through overgrow shrubs and around trees missing them by only a smidgen of space, gritting my teeth the whole time, wanting to turn my head and look elsewhere.
Of all the past “cone weares” Abbie is the most active.  Once when wearing it, she would run as normal and while I tried to limit her activity and you know it’s impossible with a BC, so she went off into her domain.  After nearly knocking the back door off its hinges, tires off of the car and whizzing past me knocking me to the ground, the “Cone” had seen better days. In two days, she went through 2 “cones” and luckily, she healed fast because I couldn’t afford too many more.

Nearly everyone has had to wear the “cone,” and sometimes I think they are proud of it because it means they will take nothing or back down even a tree, and while they may by pleased with themselves, I believe they are a little silly.

This last episode with Abbie was a little worse than expected.  After we had come inside to cool off and rest for a second after some playtime, I noticed Abbie licking her leg, sometimes a tel-tel sign of a Boo-Boo.  As soon as I pulled the fur back, “Oh my God” was my first words and then said, “we’re going to the Vet."  It was a bad time all around because of appointments and stops I needed to make, so I called the Vet’s office and pleaded, “Can you take me in now” of which they did.  I dropped her off and went to the errands I had to do but when I picked her up.  The Vet and I had a little talk,  “I don’t feel good about this, with her cancer medication she is taking, her immune system is practically nonexistent, and it’s in a dangerous spot and may not heal.”  Things turned south very fast, but he also said to “keep her restricted and in a cone at all cost and the stitches will be in at least three weeks.”

Wow, I thought is the beginning of the end?  With that, I decided that no cheating or out of the house activities were in order.  So far, as of day four, we are doing OK, a little weepy and swollen, but everything seems to be holding.  Time will tell.  Ken

On a lighter note, we have decided to make this a fun time with their “cone.”  We have searched the internet and found a few they might like in the future… 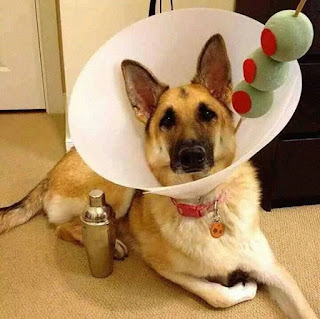 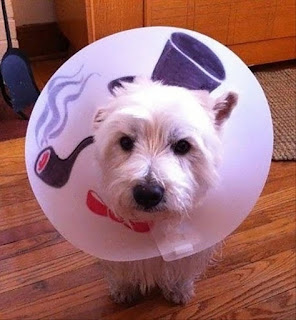 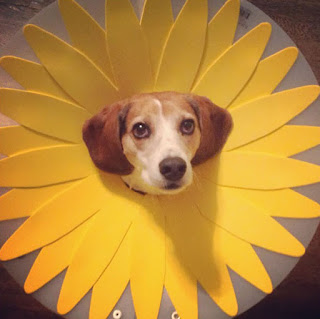 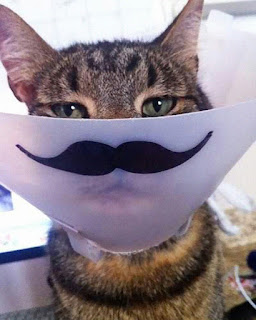 Clancy's Dream
Posted by Dogwood Ridge Border Collies at 7:44 AM