It’s cold here at the farm this week and exercise with the dogs has been at a minimum.  We do go out for limited walks through the woods and that helps, but we do stay away from the lakes just to be safe because I’ve been there before but the dogs see it as a shortcut.   I always keep them close to the house when the water is frozen or I’m not with them.

You try to invent things to do but you’re limited with the space inside or the outside wet ground.  It’s a yearly thing and I am so grateful that they seem to understand and seem to like extra naps.   Because of the coldness, Elaine usually has all ten dogs inside.  She says she like’s their company but I wonder if that’s is a reflection on me… hummm, never thought of that.  Well at least I get to come in too and not at the back door, pawing at it.

This last Friday night, while I was checking my email and messages, Abbie and Dutchess was in my office with me.  Several minutes earlier, Elaine was also there but went to the family room to watch TV and the dogs stayed, maybe they wanted something.  They were very quiet and made little noise but I noticed something touching my chair, I looked back and noticed Abbie’s face between the seat and armrest and she had placed a ball on my chair seat.  I reached back behind me and I found a tennis ball and she just stared into my eyes and didn’t make a move.  “Sweet girl” I said and placed the ball on the floor just to find it back behind me again and again.  I thought what the heck, I picked the ball up and knew we would get into trouble but I ever so softly tossed it.  It was tossed  just a few feet away but to them it was game on.  I will tell you that Abbie and Dutchess will knock over, dive, crash, or smash anything that is in their way to get a ball.  My angel self said “What are you doing” but my mischievous self said “it will be alright” and it won.
I know we had a calamity in the making with all the other dogs just a set of steps away downstairs, and we all know Border Collies can hear a tennis ball bounce from a long distance.  This is not the first time I have played ball in the house.  Once during the Christmas season, everyone had gone to bed but Dutchess and me. 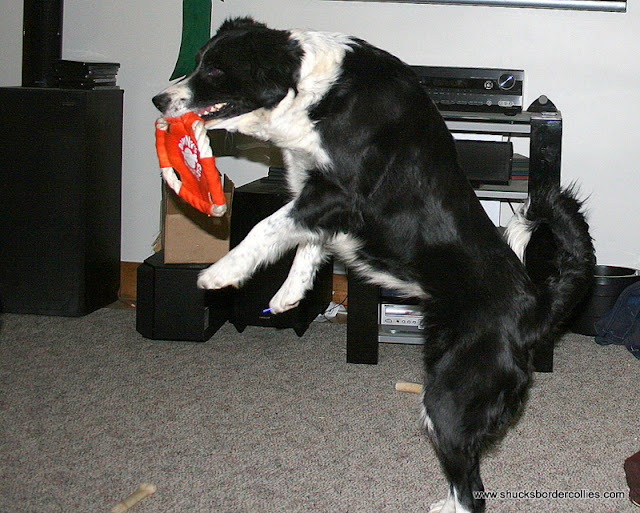 She wanted to play and against my better judgment, we did.  She played so hard, she knocked over a leather recliner by diving into it to get a ball.  On a spin move, she fell into the Christmas tree, sending it to the ground where ornaments flew in every directions so I know I need to keep this calm and keep the others from hearing.  I knew it was trouble and the adult came out and I said, “We’ve had enough” and placed the ball on a shelf out of reach, such sad looks...

I don’t know what to tell you to do when your dog is bored and with most, it’s an easy fix but when you have a high spirited, energy filled Dutchess dog, you’re on your own…  Some people think I set up the photos of her but as God is my witness, I don't and think of what I don't get.   She is always into something and even if it's bad, she has a good time doing it.  Good luck if you have one of her sisters...  Ken


See you next week or follow us today on  Facebook
Posted by Dogwood Ridge Border Collies at 7:59 AM