If I have said any phrase of words in my life more, I would have to say it was “Drop it, Drop it! Or DROP IT!!!” speaking to one of my dogs when they were holding something in their mouth.

Most all dogs will pick up things that could include sticks, rocks, bones or anything that strikes their fancy at that particular moment and according to Google there are some pretty good reasons.

While these are good reasons, apparently they never talked to a Border Collie because they have their own ideas.  Just last night, I was on the driveway and one of my dogs (Dutchess) came to me with a tennis ball in her mouth.  All the dogs were standing around looking at her and looking at me wanting me to do something, “Drop it!” I said, It's not play time because there was a big storm coming in and I was trying to get everything ready, putting stuff away and she did and all of them are pretty good about it.  I took the ball and put it up and in just a few seconds, she had another one, and again I said, “Drop it” and put that one up too.  You may wonder where they get the balls from and that’s a simple answer.  Dutchess can open most anything and knows where to look. 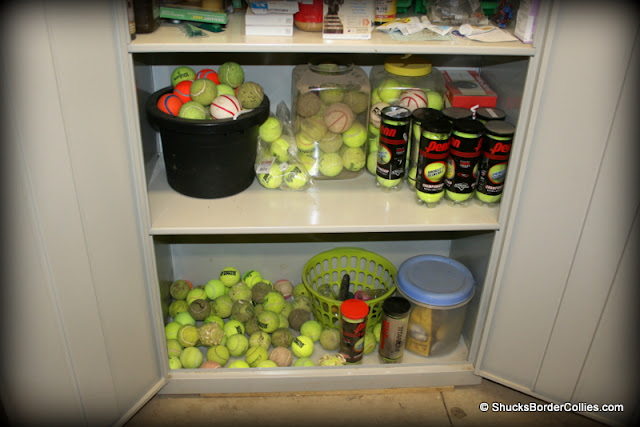 We have thousands of them and when we go out to play, I will take at least 4 or 5 with us and a few of them will carry one in their mouth.  They get excited and see another ball zoom by and they will drop that one and go after the other, leaving them all around the farm for a later find.  I’m sure someway there is a big stump with tennis balls stacked behind it.
When we do play, I will always chuck the ball far away, wait for them to return and then go again.  Well… this came to a stop, Abby, Molly and Annie like to hold the ball in their mouth but will run after the another ball too. 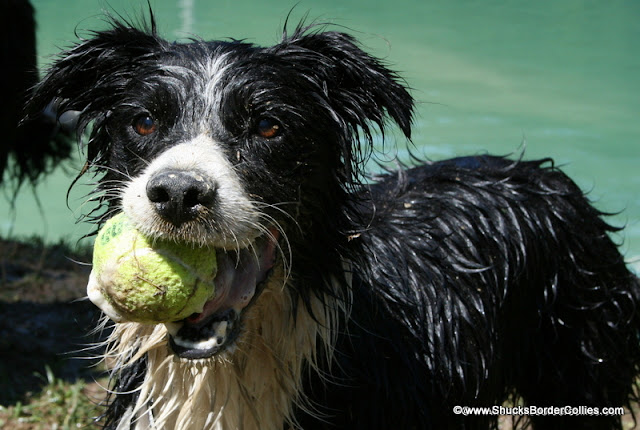 I don’t know why they do this but maybe it’s because they will always have one in the “ready,” position just in case they need it.  They will run appearing that they are going to fetch the ball but even if they beat the others, they just turn and run back to the launch area and wait.  Usually, most dogs will “drop it” but on occasions, a few dogs that come over for a play day will get the ball and run in circles driving my dogs crazy.  Mine will just watch the confusion, not understanding, but Clancy and Dutchess will both look at me and I will utter “Get it” and they will follow the dog holding the ball and while one is getting their attention, my other will pluck the ball right from its mouth before they know, and the game will resume and everybody is happy.


To the amazement of everyone… Some Border Collies could care less about a ball or Frisbee.  “What” you say, at least that’s true around here.  Gabby and Doc could care less about catching something.  They will always run as hard as they can with the others after a ball but will following one particular dog, keeping a very short distance.  They will become their shadow and will not even look at the ball.  I have attempted to interest them by throwing a ball or Frisbee and I don’t think they ever saw it.  A few times, I called their name, getting their attention and the ball would fall right in front of them or even hit them… no response but they still have a good time.
I know my dogs understand what I say, it just depends if they want to understand,  Most time they do but they can be a little hard headed but can talk too.  The times they speak the loudest is when they use their eyes or tongue and then they speak.  When they look in your eyes searching for a connection and find it or lick your hand or face just to express their love, they have spoken more words that we could ever fathom... If you just look back at them and accept what they give.   Ken

See you next week or follow us today on Facebook
Posted by Dogwood Ridge Border Collies at 7:51 AM