As I walked down the corridor of the kennel at the Tippecanoe County Dog Shelter looking at the dogs one last time, an employee came in, I turned my head away so no one would see my tears, I was embarrassed… 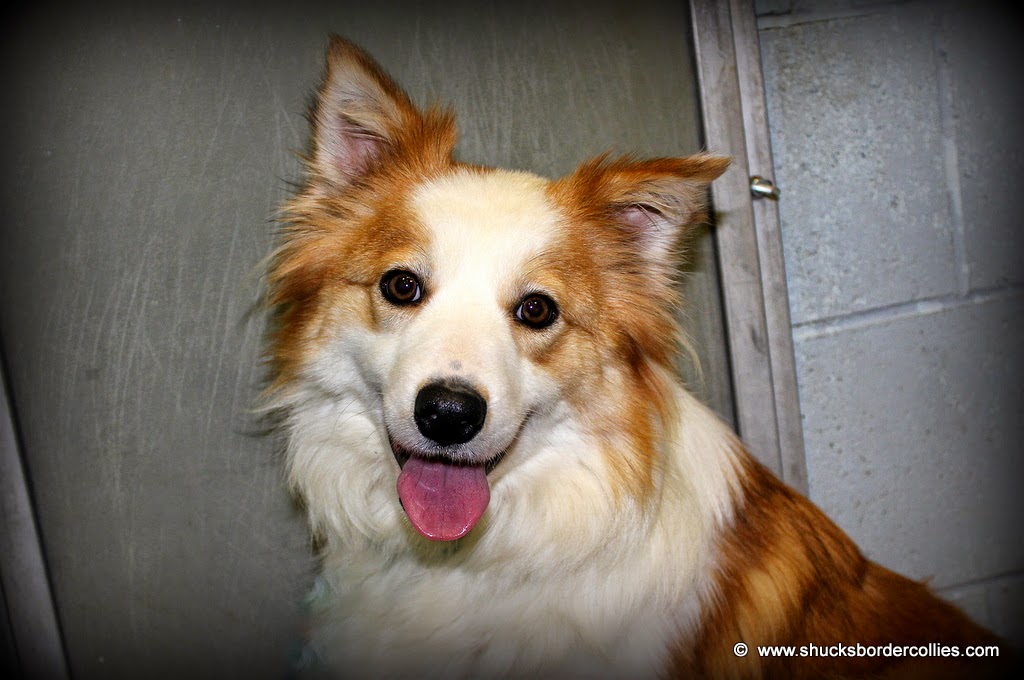 As I turned out of my driveway on Saturday morning headed to the Tippecanoe County Dog Shelter, my mind flashed back to another time, when I made a visit to a dog farm.  All the negative emotions came flooding back to my conscience as it still does so many times.  Another long road was ahead of me and I have travelled many miles along with others.   I turned onto the interstate with my thoughts flooding into hundreds of directions of what to do.  I remembered back to when Karen Newhall and I transported five Border Collies to Glen Highland Farm in September of last year.  It was one of the most moving experiences I have ever had.  It changed me forever and changed my practices with Border Collies too.  We have worked in rescue for several years but last year, we had our last set of pups.  All of our attention now is directed at helping to restore, re-home and comfort the Border Collies in need because we love them so very much.
Saturday’s trip was planned at the last minute and I think it was because I “just” needed to see the dogs and hold them in my arms and in my own way, let them know we will do everything we can. 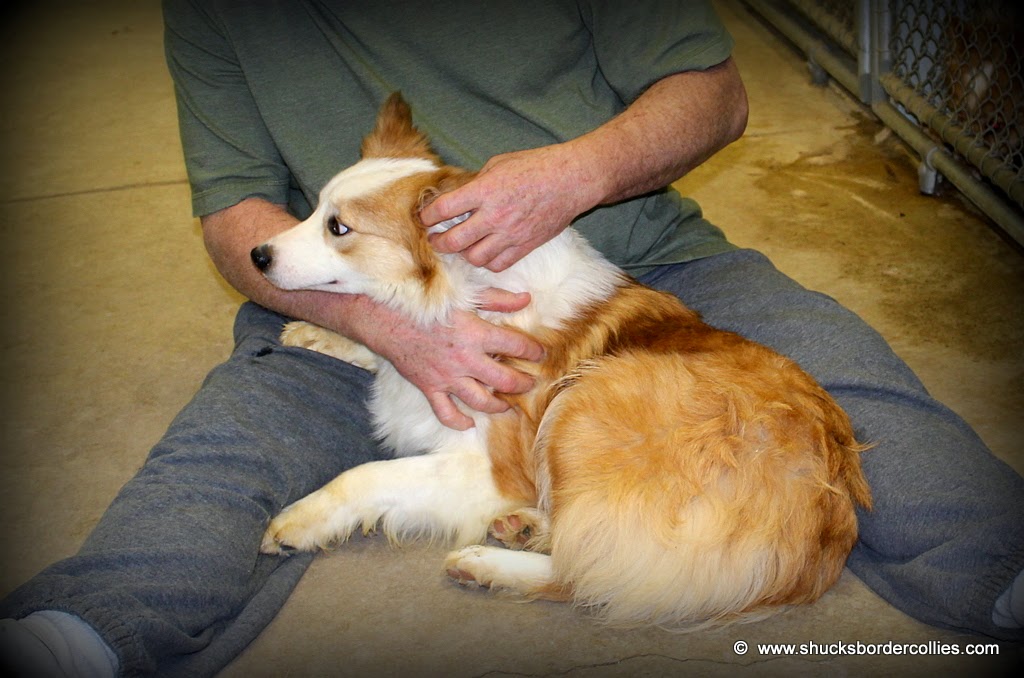 A week or so earlier, I was sent a news article, “Seven dogs removed from deplorable conditions” and this is the very place where the “Lucky 5” Border Collies came from last year bringing the total to nearly 60 dogs confiscated or relinquished from the same place.  As I pulled into the shelter where the dogs were at, my emotions that I thought had healed came rushing back in a torrent.  I knew what I was going to see again but I didn't know it would be so bad.   I had been watching the progress of the confiscated dogs in the news and it broke my heart that one of the seven dogs, an eight-month-old, had to have his eye removed for medical reasons, but some others needed dentals, x-rays, lice removal and all needed vaccinations from lack of care I was told. 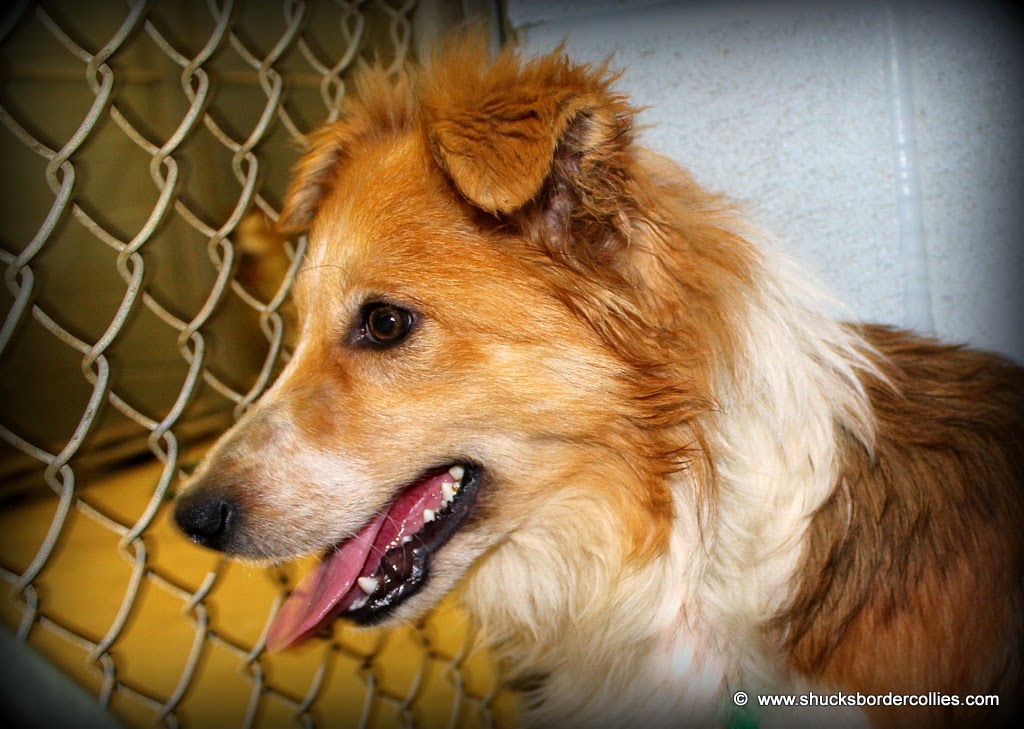 I met Nita Pollock, the owner of the kennel, along with Sharon Dull who works with the dogs frequently, giving attention to every one of the confiscated dogs.  The dogs look great in the photos but the photos are deceiving and many months of work and rehabilitation will be needed, and to think, four of them are only 8 months old.  The kennel has had these seven, confiscated dogs for nearly two weeks.  They were groomed by Purdue students and were brushed, cutting fecal matter from their fur, which is stained so bad from urine and feces, it will take months just to get the colour back and the fur has a texture of a Vaseline type material that will not release except for time.

Sharon and I each were sitting in the runs with each dog just talking and touching them. We didn’t force ourselves on them, we allowed them to do what was comforting for them. Sometimes that just meant we sat there with them and that appeared to soothe them.  When we tried to get them to walk with us, the first thing I noticed was that when the kennel door was opened they would not walk forward or try to get out at all.

The outside was a new world to them and the kennel was their safe place and as much as I coaxed them they would put on the brakes at the threshold.  When I lifted their front legs over, their back legs would stop them from going any further, they would cowl down close to the ground frozen in that spot. I noticed that sometimes some of them would cowl in the corner with their head staring up at the ceiling.

It was a very moving experience on Saturday and I was told that they are light-years ahead of where they were just 12 days ago. With time, patience, socialization and most of all love, something I suspect they have had little of, these things will make all the difference.  What help they initially needed for the urine stained fur, removed eye, dentals, x-rays, and vaccinations is so important, but what they will surely need now to survive, is someone willing to fight for their very life because at times, they were left out in the cold literally with frozen water, if any and living in their own waste. 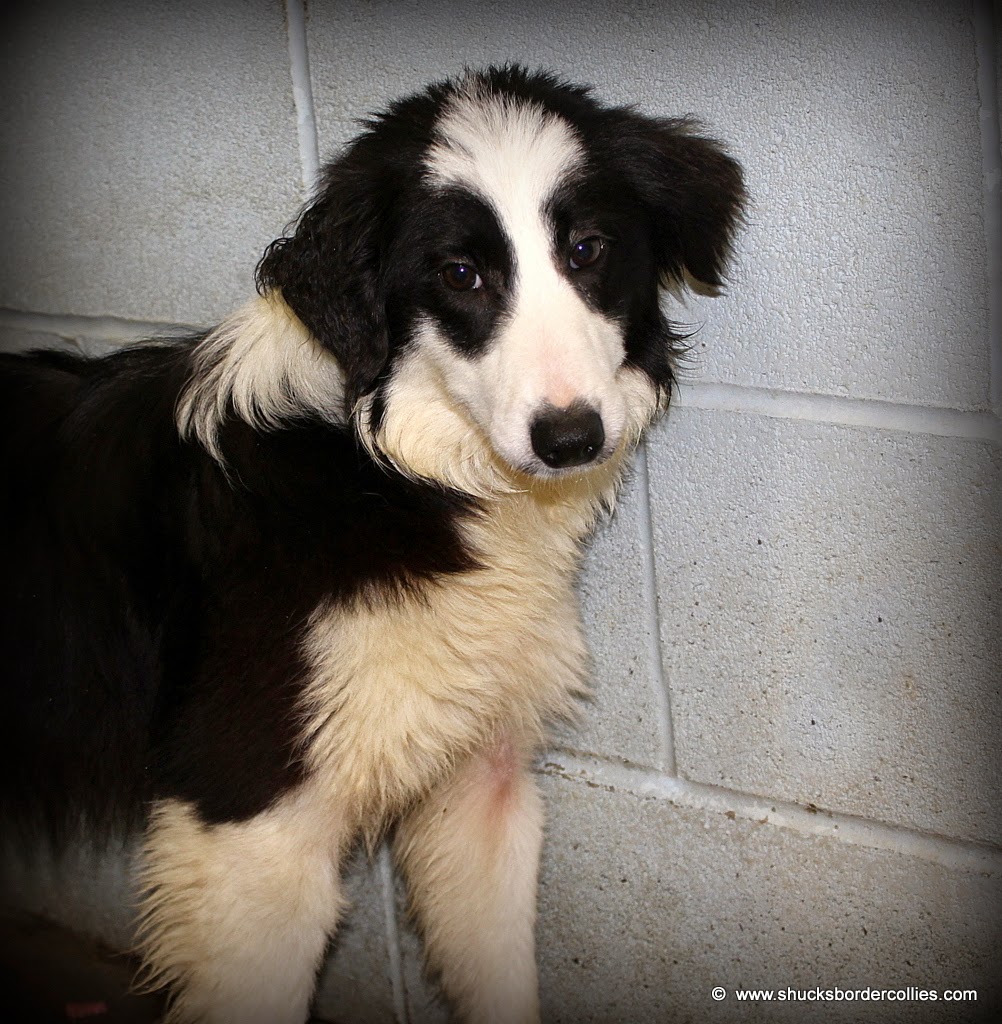 As I walked that final walk down the long corridor for my last glimpse before going home and to tell them I loved them, I stuck my fingers into each kennel door to touch their nose, most would touch and lick my fingers, some would back away but as I walked a little further and looked back, they always walked to the front, peeking around the door, curious of what this is all about and I always saw “just” a small tail wag, hopefully, there is hope because people care and hopefully do what it takes.  Thanks to all involved…

Note: the dogs need many months of work just for basic survival, my trip was lacklustre to them and everything to me, just to see what I have been told many times “You just can’t imagine”.  Truer words were never spoken, No you can't imagine, trust me…  Ken

Posted by Dogwood Ridge Border Collies at 9:04 AM