Last night I was sitting on the couch and we were just finishing dinner and as usual, the dogs wanted part of our food.  I will give them a snack during our snack time but when it comes to my main meal, it’s all mine so there is no sharing.  I even tell the dogs “this is my supper, don’t eat mine and I won’t eat yours” and they seem to understand.  After we were done, I looked at Shepp, “you wanna go eat?” I said, and his ears popped up and his big brown eyes opened wide, his mouth opened a little and he was all smiles while he cocked his head from side to side.  I said it again, “you wanna go eat?” and then Finn looked up and her ears went up too because she also understood.
Don’t tell me they don’t understand, I know they do I thought.  Shepp and Finn went to the door and Little Boo went too, he knew something was up.  Before I got up and opened the door, I said it again and again and they were all excited and started barking, they were hungry and they let me know.  I’ve seen a lot of dogs but I never thought I would see ones that can understand things you say and at times Border Collies know, Elaine and I will spell the word out so the dog doesn’t get excited and even then, sometimes they do, scary... 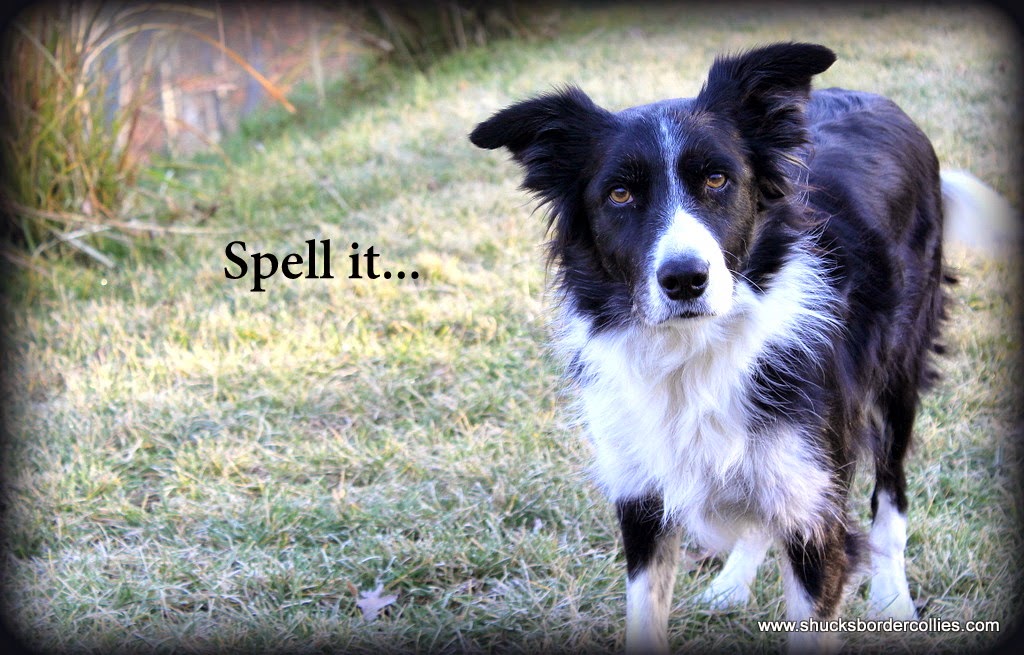 A border collie called Chaser has been taught the names of 1022 items more words than any other animal. She can also categorize them according to function and shape, something children learn to do around the age of 3 year old.  Over three years, they taught the Chaser the names of 1022 toys by introducing them to her one by one, getting her to fetch the toy and then repeating the name to reinforce the association. They regularly tested Chaser on her vocabulary by putting random groups of 20 toys in another room and having her fetch them by name.  Chaser, now 10, never got less than 18 out of 20 right, in 838 separate tests over three years and to think, I get excited when I say a few words and they do what I want or sit down.
It always starts out the same, a new dog or boarder comes in and they are a little unsure of what I want them to do when I give the commands but they will watch what mine are doing and usually follow suit.  In a few days, after watching, they fit right in and go with the flow with my commands.  Do they just follow or do they really understand?  It’s my opinion that we put the confines on what they know by “not” working with them more than we do and I too am guilty of this.  Nearly every dog will usually know, sit, shake and a few other words and commands but have you ever thought of the quandary we would be in if they knew more words than the few we teach them?  It would be heaven because they could be my helper or learn a task.  Several times in the past, we have had dogs that loved to play with sticks and although we don’t play with them for safety and health reasons, they will bring us a stick and then another and another and so on.  Elaine once said that “if this keeps up, we’ll have all the sticks picked up” and she was right because they are driven and smarter than we know.


While I am sure that they know “let’s go eat”, “let’s go outside” or “let’s potty”, this is only the starting point of the thousands of things that they could do and learn.  I can only imagine the trouble that Dutchess could get into if she knew 1022 different words.  When I say something and look into their eyes I know they know what I am talking about.  Even when I look at something they want such as a door, gate or Frisbee they will watch me look, look at me with their perked up ears and in my heart, I know they are reading my mind, and to think we only thought they knew “sit”.  Ken
See you next week or follow us not on Facebook
Posted by Dogwood Ridge Border Collies at 8:00 AM