In March of 2014, as I took my second step onto the ice of the lake…a loud crack echoed but there was no time to react.   I fell through and I just pushed forward with more determination toward the middle of our 20-foot deep lake, toward my purpose.  My tunnel vision had set in and the only object in my sight was the ever sinking face of a dog had broken through a soft spot in the ice that was struggling to keep afloat and was 30 feet from me.  In just a short time I was witnessing the fear and its life seemed to be weakening right in front of me I knew we have a very big problem. 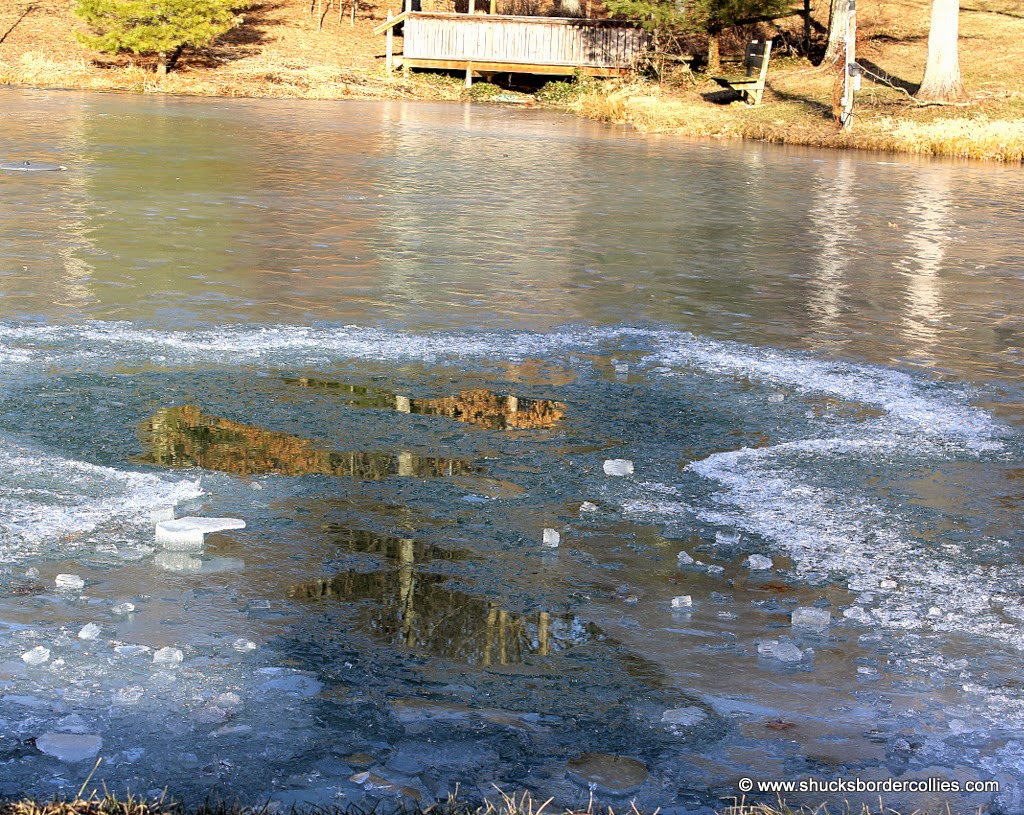 Just a few minutes earlier, the dogs, and I was playing and I went inside to get warm and clean up and to let them rest.  I heard a dog crying out and looked out the window, and at first, I didn’t see anything but when I stepped onto the porch looking toward the lake, an explosion of fear bolted through my mind and the adrenaline flooded throughout my body like a lightning rod and not “one” single second was wasted on anything!  Through the house, I ran as fast as I could to the closest door.  I flew through it, not even closing it as I sped to my mission which was clear and ever-present. 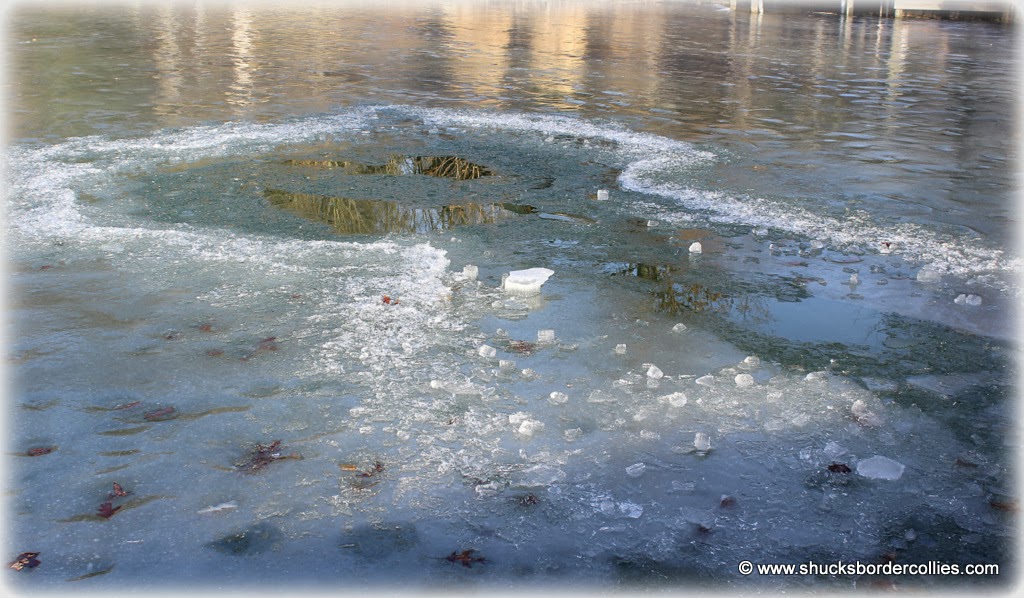 After I fell through, and was neck-deep in the water I still had 25 feet to go and the ice was nearly 3 inches thick and appeared to be getting denser.  My only tools were my hands and fists and it appeared to be working for the moment but my movement was slowing and I was coming to a stop.  With no tools to help and no time to get them, I needed a plan and in microseconds, I had to think and the dog’s eyes never looked away and kept me focused on my mission which had to be completed at any cost. I knew there was not a second to lose.  The only thought that came to mind, was if I couldn’t break the ice or could I could swim to the dog underwater and while I am an excellent swimmer and scuba diver, I know directions can easily change underwater and the chances of finding a dog in a small hole 30 feet from shore are nearly impossible.  The chances of surviving are about zero, especially in black water because there is no sunlight under the ice.  Bringing the dog back with me underwater to the very spot I came from was a very long shot.  There is only one chance at it or you’re trapped.  With that now calculated I was determined to forge ahead and with all my might, breaking the ice, there was no other way and it HAD to break. 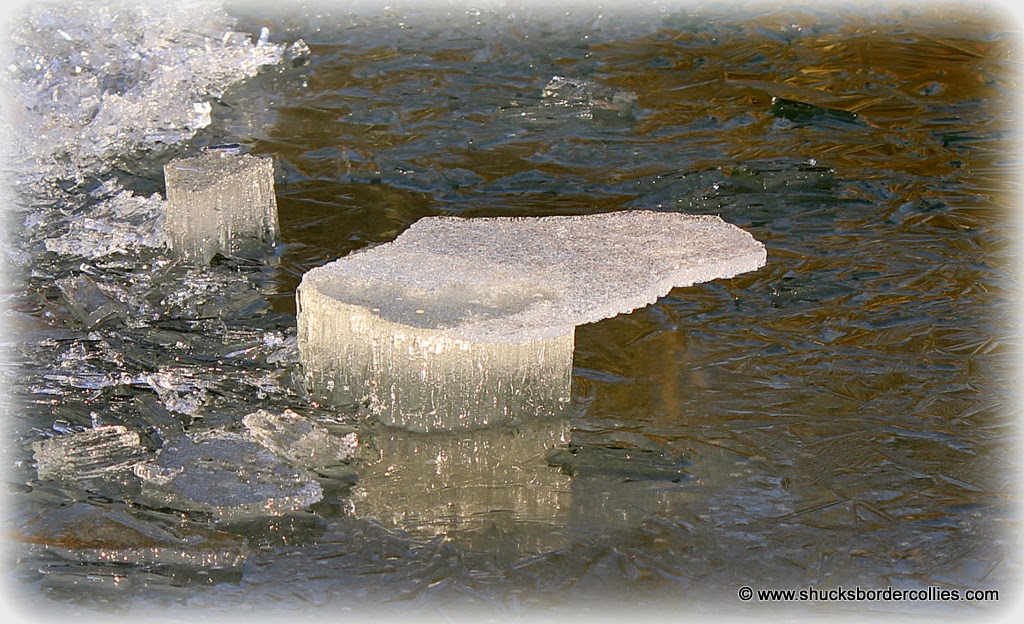 With all the fortitude I had, I pounded the cold hard ice with my fist, forearms, and chest, and it started breaking, it was hard, but it broke and I made it to the dog that was depending on me to save its life and we both knew it.  Thirty feet from shore and in twenty feet of black water, the dog latched onto me with all four feet and attempted to crawl on me because I was solid ground which is a normal instinct.  While in college, I was a lifeguard and was trained in rescue and used the very training to turn the dog around and started pulling it from the back, swimming through the ice chunks to the shore, but when I turned, I discovered another monumental problem…

My other dogs were now on the shore and attempting to come to me but, it’s not playtime and they can’t help, only hurt and more possible tragedies could occur.  With all the strength I had, I shouted “Go…Away” and everyone knew the firm voice, and turned and ran to the kennel but not before stopping, looking and knowing something was very wrong, but they obeyed.  When I got within fifteen feet of shore and the dog was facing the right direction, I pushed with all of my might, pushing the dog even closer think the dog would swim to shore.  I had a very brief break but in just a short second, the dog turned and came back for protection and the challenge to survive was on again in ice water that was now only 10 feet deep but could have been 100.  Breathing air and gasping water, this was going to stop, one way or another.  I again turned the dog and pushed kicking my way closer and once I touched the ground, I knew I was home free, choking and wheezing for air, we were on solid ground…we had a chance. 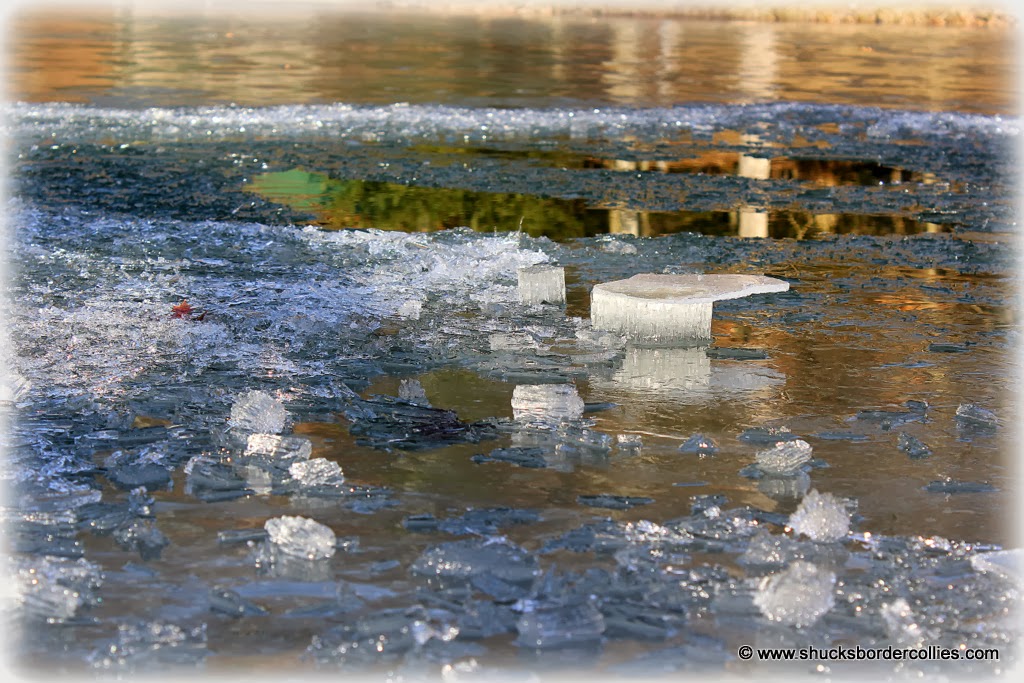 There was no pain or cold…those feelings were gone and that scared me and during the long walk back to the kennel, my socks froze to my ankles and my tee-shirt was frozen stiff.  When I reached the kennel, I dried the dog off, bedding it down in the heated kennel, making sure everything was alright, I got a loving lick and walked to the house on hard rocks without shoes, not feeling any pain.  I got into the shower, I knew to start with cold water and as it got a little warmer the pain started.  My legs, arms, feet, and chest started bleeding as the circulation was returning and blood was now flowing from the cuts made from breaking the ice, but we were alive.

I never understood why a person would run back into a burning building to save someone even if they knew their life would be in danger, but as I sat there typing, I now do.  Nothing will stop you and for years, I have played this very scenario over in my mind a thousand times because I have two ponds and cold weather and never had the answer but that day I found out.

Everyone is fine, maybe a little wiser but truly know the driving force of love and determination and doing what is needed to be done…is very strong.

One of the factors that may have saved me in this rescue, was the fact that when I came in after playing, I took a quick shower and as I was just starting to dress, I heard the dog whining from outside and went into action, I was not dressed and only had a tee-shirt and sox on, which allowed me to swim…Things could have been so different, I was the only one home and living in deep woods.  Would I do it again?...

Posted by Dogwood Ridge Border Collies at 7:26 AM