I never thought it was, but it is.... because I’ve seen it too many times.  It’s something that border collies have in them that comes from the tip of their tail and it’s always there.  Unfortunately, most people never see it and luckily, some people see it every day and its even part of their workday, just like a tractor or a device that they use for their work and can’t do without.
Several years ago, when I was selling a litter of pups, I got a call from a lady named Karen.  As I always do, I went into the perils of owning a Border Collie, just to make sure she would be a good candidate to own such a spirited dog.  After several minutes, she stated she had a sheep farm and needed a good Border Collie to help with the sheep on her farm and knew what she was talking about.
A pup from Clancy and Dutchess was sold and went home with her.  After several months, I received an update of “Nelly’s” progress from Karen, “Wow” I thought, “Nelly is doing well”.  A few months later, Nelly was part of the sheep farm and was learning more every day, making some of the chores easier for Karen.  After a few years, Karen purchased a second Border Collie from us and she was a red one, which she named “Ruby”.
Something we had always talked about was taking Clancy up to Shady Creek Farm north/east of Indianapolis, which is owned by Karen.  On many occasions, Karen invited us to bring Clancy up just to see how he would do with her sheep and last week we were finally able to go.  We went with another Border Collie owner who owned a couple of our pups. They took “Hope” one of their dogs with them which had been there before and was learning some great moves with the sheep.

As we arrived, we met the dogs, Karen and the free range chickens.

I will admit, I was a little nervous about turning Clancy out with a flock of sheep, with no restraint, in a very large field with nothing but Karen and a “shepherds hook”. 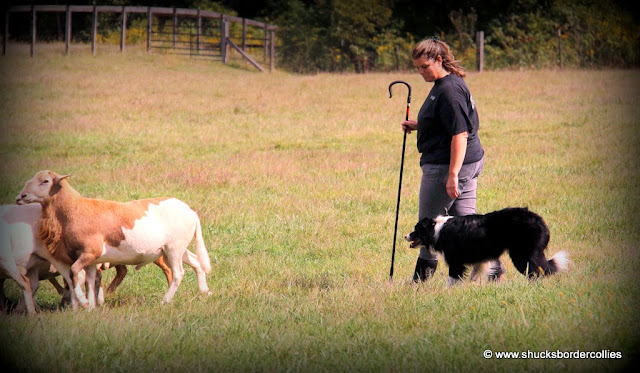 Clancy was led inside the gate and into the field he went.  He stood right beside Karen and was under her sole control.  Nelly who was helping, was given the command to “go get” the sheep which were in another pasture about 600 feet away grazing on the grass.  It was pure delight to see her run as fast as any dog could and gather the sheep together bringing them to the gate, steering them right through the small opening and bringing them to us for Clancy to practice on.  I will tell you, if you have never seen this in person, it will bring your emotions right to your throat. 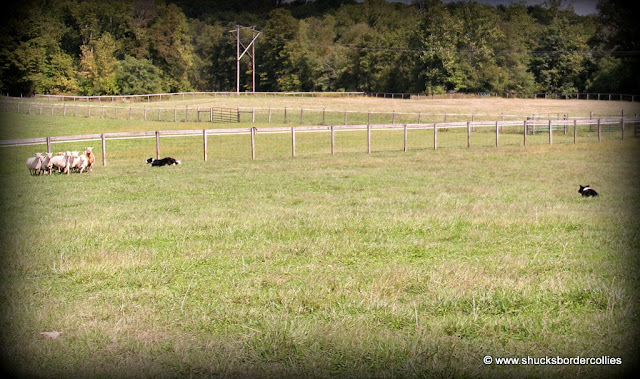 Remember, when Nelly left us the first time, she was just under 10 weeks old and now, she is the  master of a profession she was bred for, something most Border Collie  owners never get to experience.
Like ducks to water, Clancy got into the stance and went right to work, corralling, turning and moving  the sheep, but because he was a novice, and as much as he wanted to work, but didn't know how, he looked to  Karen to give him the directions that came natural to her and to Clancy. 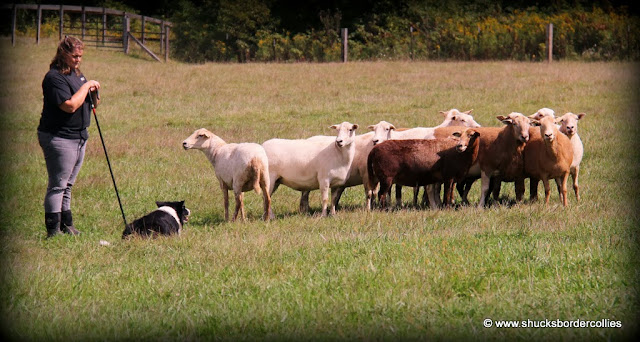 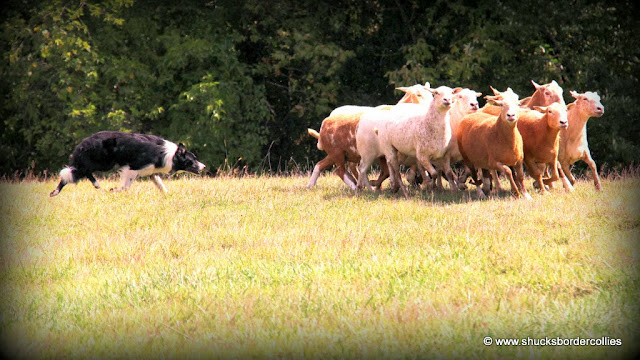 Ruby, Karen’s second Border Collie, is learning to do the same thing that Nelly is doing with Karen. Nelly is also helping Ruby learn the ropes.  Many times, they work together doing the job that is needed to bring the sheep to the where they need to be, saving man and machine many hours of time and trouble and providing a couple of  Border Collies the passion for which they were bred. 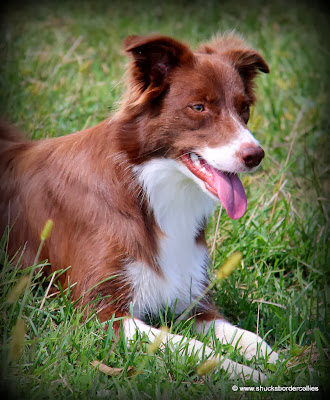 It was a fun day at Shady Creek Farm.  We had good conversations, snacks and especially got to see the love of our lives do something they were bred to do which seemed so natural to them.  If this is something that you want to experience, it will set your heart on fire and your dogs too, Ken
Posted by Dogwood Ridge Border Collies at 11:42 PM