It Always Comes Back to You

It's A Wonderful Life

If I was in a hospital bed or in a facility that was caring for me, what a joy, if through that door walked “Abby the Border Collie”, a therapy dog right here in my hometown and she got into my bed and nestled her body up near the pillow and allowed me to drift back to “my” wonderful life, what a comfort that would be.
Get involved with your dog and make it a wonderful life for both of you....  Ken

Just a few weeks after writing the above but before my life threading ordeal I shadowed Greg Jones with his dog “Abby The Border Collie”, just to check out what a therapy dog does and only four days before I soon found out.

The following is a story from Greg Jones the owner of Abby The Border Collie, a therapy dog and his story of when I was in the CCU (critical care unit) at the hospital.

Like many people that have a Border Collie, I occasionally surf the internet trying to learn about the breed. That is how I came across “Shucks Border Collies” and how I eventually met Kenny.  I am fortunate to live only 25 miles from the Shucks, and Abby even goes down for play days every now and then.
Over the past year or so I have gotten to know Kenny and Elaine, along with the members of their wonderful pack of dogs. Earlier this year I asked if they would mind if Prime Time Magazine, a publication of The Republic newspaper, did an article on them along with the dogs. I had the feeling Kenny was a private person, even though he is very much a people person, and I was happy when he agreed to the article, since I thought the picture taking opportunities would be awesome.  Kenny is a lot like me, in that he is more comfortable behind the camera than in front of it. When he told me he liked the article and pictures, I knew we had created something special. In the process of making the article happen and taking the photos, Kenny and I had several chances to talk, about dogs, photography, and life in general. In other words we were getting to know each other better. Somehow we always touched on the subject of doing the right thing, for the dogs and for others. Many of our core values just clicked.

Since Abby and I go to our Hospice and Columbus Regional Hospital in Indiana every Thursday evening, Kenny asked if he could shadow us one evening. After filling out all of the paperwork, he went with Abby and I on Thursday, August 22. It was not a typical night for us, as we simply did not interact with too many people; many were sleeping or did not wish to see the dog. If I said it once that night, I said it a hundred times, "This is not a typical night", we went out to eat and we talked about therapy dogs. It was good to hear Kenny start brainstorming ways to reach more people, ways to optimize the visits, or to put it another way, Kenny was putting his touch on it. Good stuff was discussed that night, and it was clear to me that Kenny really knew the value of a dog in the situations we saw that night. 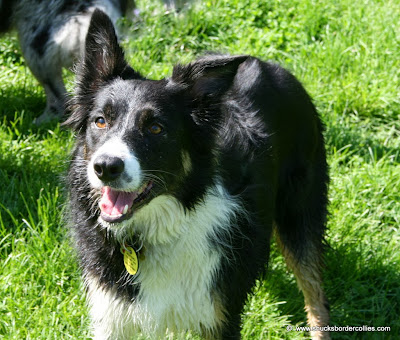 The following Monday, just as I was getting ready to call it a night, my phone buzzed, announcing a new email. It was from Kenny’s Wife Elaine, she said Kenny was in the hospital and wanted Abby to visit him, and to please call her. It was later than I would normally call someone, but since she had just sent the email, I went ahead and called her. She was understandably upset and said Kenny had asked for Abby. As soon as I was dressed, Abby and I were off to the hospital at 11:30 pm.  Having left Abby in the car, I walked into CCU knowing therapy dogs were not allowed in the area, but I was hoping we could figure something out. One of the nurses recognized me and actually asked where Abby was and I told her why we were there. She looked at another nurse and said, I wouldn't see her, would you? After that was handled she went to see if he was sleeping, fortunately he was sound asleep, but I did write on his board that Abby and I tried to visit him.
The next day, Tuesday, Abby and I made a special trip over to the hospital and when we arrived, he was sleeping, but we did get to meet Brad, his son! Elaine came out of the room and we talked with the two of them before going into the room. Kenny was very sick but still wanted to see Abby, so I gave her the command to put her paws up on the rail and say hello. The bed was pretty high, and she could barely see over the rail standing up on her hind legs, so she went back to standing on four paws, but still totally paying attention to Kenny.  Keep in mind she and Kenny are great buddies, and as soon as she dropped down, Kenny patted on the bed and quietly called her. This is a standard command we use to tell her to get up on the bed, and no sooner had Kenny patted the bed and spoke, was she was up next to him. Keep in mind the bed was as high as your kitchen counter at home, and she had less than half of the hospital bed to land in if she was to miss hitting Kenny. I swear, only a Border Collie could have pulled that move off, with a standing still three foot vertical leap, totally miss IV lines, chest monitor, and not lay a paw on the patient. I was impressed. Elaine was still getting the sentence out of her mouth, “She can’t get up there…” but she did.
Wednesday was a little better, Abby stayed in the bed with Kenny and we talked a few minutes, he was rubbing Abby as she lay beside him the entire time. Elaine had been napping when we arrived, so Abby got into bed with her for a little puppy loving time as well. We were also able to bring him a slightly over-sized get well card.  As I was headed into Kenny’s room, a nurse that we know was coming out so I showed her the “card” and said we came to visit Mr. Border Collie. She did a double take and said, “That’s my patient!” I smiled and said “Yes, I know”.  At that point she turned back into the room with us to announce our arrival.
We have been faithfully working for over two years as a therapy couple and I am pretty sure this nurse questioned at times the value of therapy dogs, but she soon learned not to.  Back to our Wednesday visit with Kenny. This same nurse had never seen Abby in the bed with a patient before.  Kenny was smiling, talking to Abby and he was rubbing his face next to hers as she lay next to him, upside down, and getting a belly rub. The nurse looked at me and said, “Is this normal for her?” I smiled and said, “Yes, if it is what the patient wants, and Abby knows it’s what they need, sure, it happens sometimes.” It was like the light bulb turned on inside her head, she figured it out it that moment, the dog’s help people heal. 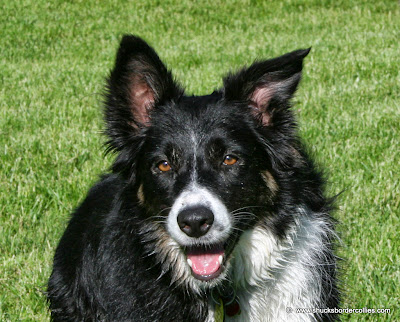 Thursday came, our normal night to work, and we visited Kenny at the last of the shift, since I knew we would probably talk past the end of visiting hours, and we did. Kenny told me what had happened to him since he had been in there, not really remembering any of our other visits. The fact that he didn't remember our other visits, told me he wouldn't remember any of the events I have shared here. We talked about faith, and fate, family and friends, and the absolute truth that we never know from one day to the next what God has in store for us. We both feel the Lord has more work for us, and dogs, particularly; therapy dogs and how they will play a prominent role in a situation. It will be interesting to see where things go from here.  Kenny, I am ready whenever you are buddy, so let’s see what He has in store for us...

Just this last Thursday, as we had done several weeks ago, Greg and I went calling with "Abby The Border Collie" at the hospital, only seeing different people.  I walked the floor and saw "my" room and it did send chills down my back and I thought how luck I was that another chance was given to me to make a difference.  I did see the nurse that worked with me and we spoke but most importantly, we both knew what "Abby The Border Collie" did for both of us...Thank you Greg and especially for the things you volunteer to do, but especially to Abby for getting in my bed and nestling on my pillow and allowing me to drift back to my wonderful life...

Footnote...I have started the process to become a therapy dog handier with one of our dogs along with Elaine.   Ken