How Many Is Too Many


Sometimes when people come over, they ask “How many dogs do you have?”  I try to get around it but I usually answer the question in a low voice, hoping no one will hear.  My son has said if I get any more dogs, he will call the “ Hoarding” TV Show, and that was two dogs ago.  But really, how many dogs is enough?   Sometimes I feel bad that I have to share my attention and love for the dogs and this comes to light when I try to put on my shoes on the back porch and they are smothering me with so many kisses and licks I have to go in the house to finish tying them.  The funny thing about it, I'm wasn't a dog person and only had one dog before BC’s, but that changed when I saw how they could wiggle in your heart, and they have.
Late yesterday evening, Molly and I went for a walk around the farm.  We were alone because yesterday I treated all of the dogs with their flea and tick medication.  Molly is the only one that will not get in the water and I want it to be on the dogs 24 hours before they all head to the lake and jump in.  As we were walking, she was hopping and skipping and wanting to play, just the two of us and she was excited she didn't have to share me.  I will usually take turns devoting some “just us” time for all of them.  But today, it was special.  After Molly’s spay surgery, she seemed to have gotten younger and wants to play more.  It was a wonderful time and we ran and played Frisbee and even sat in the grass and watched the bluebirds build their nest in the bluebird house.  That set me to thinking, what would my life be like with only Molly and I'm sure it would be good but would it be fulfilling and for whom, me or the dogs.
We have a large percent of our dog owners that have at least two dogs and I will say it is easier with two because they will play and interact with themselves but it’s not always best to have two.  Several years ago, I had a gentleman call and wanted a pup for his dog because he felt that his dog needed a friend.  Usually this is a good idea, but in this case it was not because of his living quarters and his busy life.  I ask him about how the dog does with those issues and he said it worked fine because he was involved in many activities with his dog.   His relationship was the best and he said it could not be any better.  I ask, why do you want to risk your relationship and introduce a puppy, and is this for you or for the dog?  He stated it was for the dog.  After talking with him, he realized that a great thing might change and he didn't want to risk it and I agreed.
But how many is too many?  I have found once you get two, it’s hard to stop and it easy to take on more.  The biggest part is keeping them active and involved in things that can be simple, but remember, not only do you need to stimulate their body, with BC’s you need to stimulate their mind and this can be done a variety of ways but it must be something everyone enjoys but mostly you because the dog will adapt.  Border Collies are thinkers and I believe this is why they are re-homed or put in shelters on occasion.  I know mine have outsmarted me on occasions by out thinking me, especially Dutchess.
So to answer the question, How many is too many?  For some people one is too many,
Two? 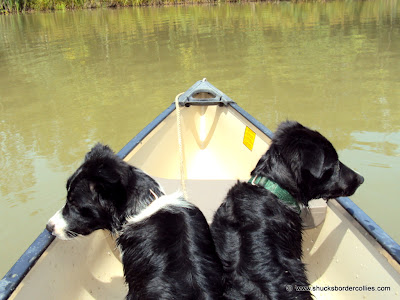 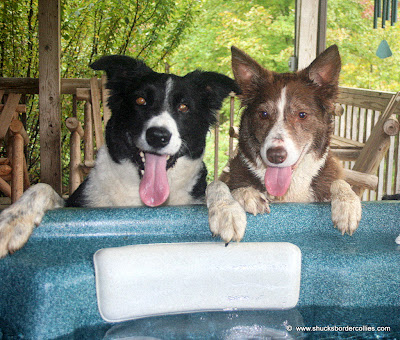 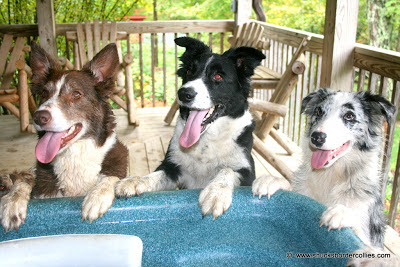 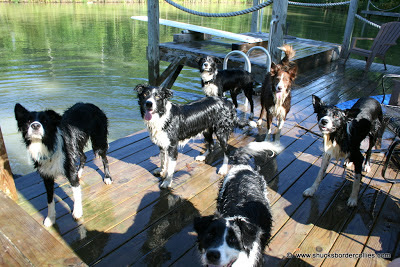 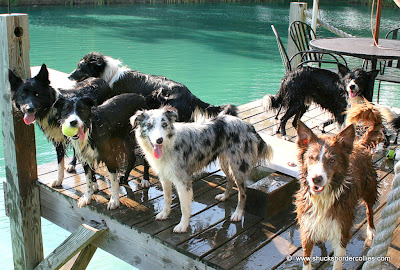 It's not the number of dogs, it's the commitment "You" make when getting a dog.  In nearly every case where things go wrong, it's the lack of commitment on the owner's part to do what is needed to have a happy and safe home with their dog.  It's goes along with life in general, you'll get nothing out of anything if you put nothing into it and that is especially true with a dog, that is just waiting to give you everything they have.

As I sit on the ground with Molly watching the birds and listening to the wind chimes on the dock, I thought how lucky I was to be able to be accepted into their world as one of them. 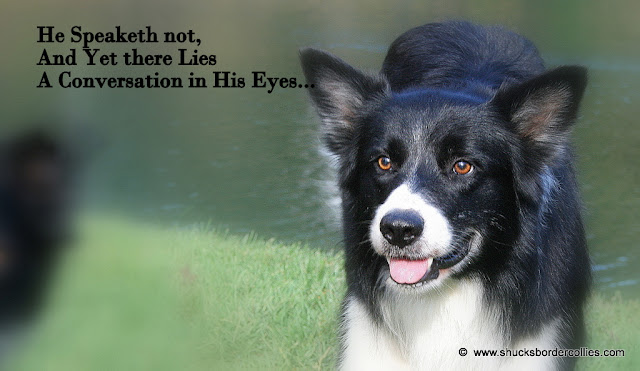 There is always room for one more….I wouldn't have it any other way.
Posted by Dogwood Ridge Border Collies at 8:23 AM