Spring "IS" in the Air

Well, we wanted it and it appears it’s here, maybe… what’s that you say’ Spring of course.  It’s been a beautiful day today and it has been this way all week.  There are always several signs that points in that direction and I have been seeing them all come together in just the last few days.  The first is my eyes start to itch because I am allergic to every tree and grass that’s grown and always suffer in the spring.  I have started taking my eye drops to keep the itching down and that helps and another is the daffodils (March lilies) finally came up in April. 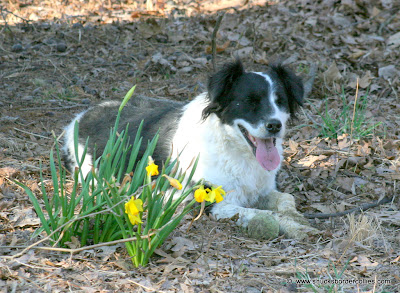 It has been wonderful to let the dogs out and let them run, where they don’t get muddy and sloppy because the ground has finally dried out.  They can even come in when they want and that makes them happy and content and it’s nice to have a medley of dogs again that stay inside at night.
The main reason I know its spring is we have entered the breeding season for our “once” a year spring love fest.   It has been a hoot because this year, we have included Doc, Annie and Gabby.  This will be Annie and Gabby’s first litter and with the colors, there is no telling what will show up because they are merles’ but whatever shows up, I’m sure they will be beautiful. 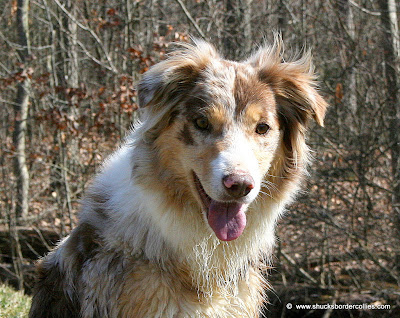 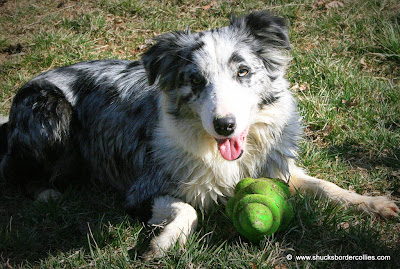 As I said it has been a hoot because all of the girls came into season the same week.  I have let dogs in the kennel and out the kennel a hundred times and at times I wonder if I am going in circles because of the activity and making sure the right pair are together to court each other.  I try so hard to keep one or the other males up, but Clancy is a champion at getting out.
Luckily, when he did escape, I was always there to capture him and put him in the big steel cage that is in the garage.  It has double locks and a steel ceiling and floor.  He has yet to escape from it, but I did find a file in the corner that I’m sure he snuck in there when I was busy for... later use.  If he gets out of the steel cage, I'm going to take him on tour as the “Magic Houdini” dog.  He once went through a chain link fence and I mean through it.  He’s not a climber and we have steel mesh preventing any digging, so he chewed on the fence and broke one strand and worked his head through it and went through the middle, leaving fur along the way.  If I did not see the results, I would not have be believed a dog could do it.  He is one determined young man.  Elaine has gone to Louisville to see her parents this weekend and I suggested she take Clancy and she did.  I just hope he doesn't call a taxi.  The good part, Dutchess was spaded the first of this year and I swear, I think she was worse than Clancy about getting together.  Several years ago we were not going to breed Dutchess and it was her last day in season.  Just one more night and we made it.  Elaine had her in the house and was going to let her out to "potty".  I said, “Let Clancy in another door and keep him inside”…Well, she thought she could keep Dutchess close to her but as soon as the door opened and as fast as she could run, she took off and ran to find Clancy.  They ran through the woods and ended up on the porch “in love”… and I'm sure you know the rest of the story, puppies born 63 days later.  She is called the “party girl” for that very reason to this day.


This will be an exciting 2 months and hopefully everything will proceed as scheduled.  This will be a first for us, perhaps three litters at once.  I can only imagine all the little pups running and scampering and me trying to walk when they are under foot grabbing my shoestrings.  Yes, Spring "IS" in the Air.  Good luck girls

Posted by Dogwood Ridge Border Collies at 7:50 AM