Something in the Air, Part II


No….No, that was last week…
As I transferred the chickens to their new chicken house, Dutchess knew something was up. 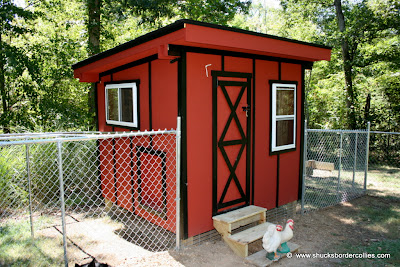 She is so curious about everything I do and she wants to be part of it, it’s her way of helping.  She usually thinks’ everything is always for her or it’s something to eat.  She watched me with a keen eye cocking her head back and forth wondering what it is. 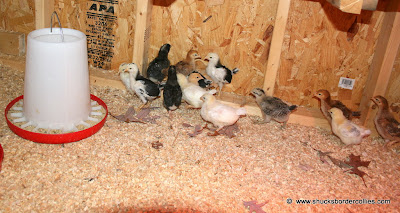 Just then, as I was putting a chick in the basket from their brooding box to move it, it flew from my hand to the ground landing safely.  Dutchess’s eyes lit up like the Fourth of July.  I could hear her mind screaming.  “It’s a toy, it’s a toy, and it’s a new toy that flies on its own”.  “Can I have it now...RIGHT NOW?  Can we take it out and play with it?  Sweet Jesus, what will they think of next.  It’s a toy that flies on its own, right out of your hand.  Thank you so much, Thank you so much”, she said.
I looked at her and said “No” it’s not for you, it’s for Elaine and I and watch your mouth" as I got that "Look"
“NO….NO….she said ,You get all the neat stuff and beside you don’t even play Frisbee and Mom can't even throw one, she holds it wrong and it goes in the trees”  “It’s not a toy’, I said “it’s something for us and it will give us food when they get big”  “Food…tomorrow?, will it get big tomorrow?, can I have more food tomorrow?”  “It will take a while” I said.  She named off the days of the week wanting to know how soon she would get food and was a little disappointed when she found out the food was not for her.

All in all the transfer went smooth, they are getting big and are so cute.  I never thought I would say chicks were cute but they are.  Everyone wants to know what we got and the only thing Elaine wanted were pretty chickens but as she picked, I only pulled up ones that laid large or extra large eggs and were only brown or white, nothing too fancy. 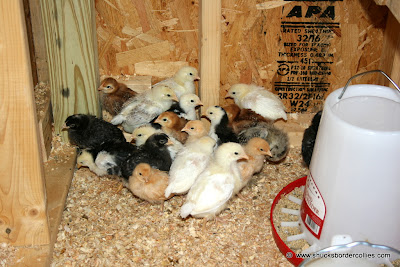 Dutchess is shattered and starts therapy this week.  This "chicken thing" has caused her the greatest of struggles in so many ways.  First it was the house I build that she thought it was her's. 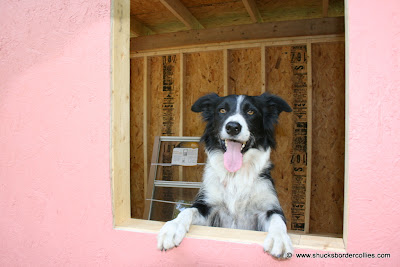 Then it was the Frisbee that flew on it's own that she could not play with and the ultimate....the food that she thought was for her and can't have.

Her only solace was as I was transferring the food and water and was busy, she decided to try the chicken feed right out of the feeder and whether she liked it or not, she cleaned it out, grit too... 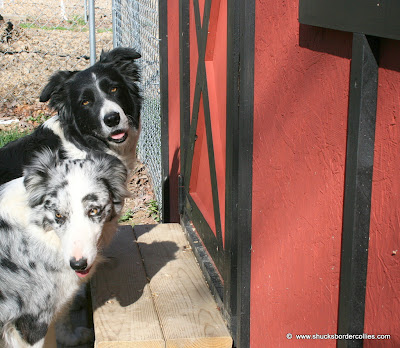 The Dog's Facebook Page
Posted by Dogwood Ridge Border Collies at 8:12 AM