I hate it when one of my dogs get hurts or are in pain.  I had to go to town yesterday and run some errands and as usual, I put Clancy in one of the kennels because I found out that when I'm gone, he likes to run around the kennels and bark at the girls and the girls like to bark back.  I have crept up on him and watched him run around having a grand time. He will even refresh himself by jumping in the lake and getting a quick drink and to cool off and he's right back at it for some more, it's their game they invented.   It’s so funny, when he sees me, he hangs his head and looks away because he knows I don't approve of it because with all the dogs barking, I'm sure the distance neighbors can hear it and I would rather they behave when I'm gone.

Yesterday, he had been out all morning and when I put him up, he was fine but when I returned, as soon as I let him out, he was limping.  It doesn't appear too bad as he will put some weight on it, but you can tell it is uncomfortable for him.  I sure after a few days, he will be back to normal.  Who knows what happened. 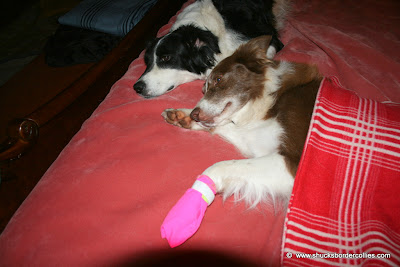 I get several calls and emails every couple of weeks and it’s usually about the same thing that has happened to Clancy.  Border Collies are tough on the paws and pads.  Its runs about half and half of either a torn or cut pads or sprained front paws.  I will tell them my personal experiences, however if in doubt, call the professional, (the Vet), they are the experts.  I have had Dutchess Abbie and Meg to the Vet for x-rays just to make sure nothing was broke.  Luckily, it wasn't and 2 weeks of rest was in order.  We once had a guest dog break a toe and had to have a soft cast for a couple of weeks but everything was fine. 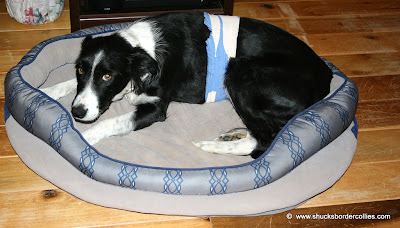 Lord knows, I have seen my dogs go through pain and surgeries the last six months, but you do feel for them and want to comfort them.  They want to do the normal things because they want to be with us or show us everything is OK.  Just last night as I was taking Clancy for a small walk so he could wee, and as we went down the lane he started to gallop and I called him back and said “Whoa boy, that'll do” He looks so hurt and I knew he was in pain and limping but he wanted to because he has the spirit in him, but I knew better and he needs to rest his paw. 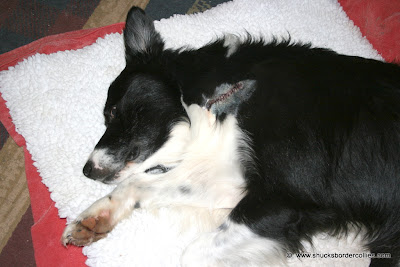 The point of this story is not so much of Clancy’s injury, but how it sends a shiver through you when you see them hurt.  It does remind me of the times my mother would say to me as a small child, “This will hurt “me” more than you” I never believed her until I had kids and said the same thing to them, and now it has been passed on again.  You really do feel for them and at times I don't know why.  It may be because you know they have a pure heart without any malice or underlying thoughts.  It may also be that you don't know what is wrong and you feel so helpless, if only they could tell you what is wrong.  It pains me when they hurt. 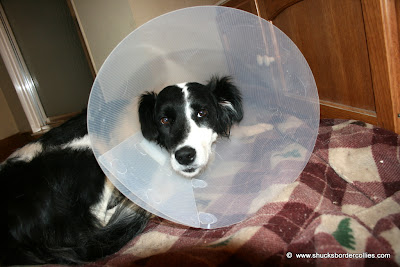 This morning he seems fine, probably just needed a little rest, but I will tell you, he will be kept on a short lead for several days, because as we all know there is no medium speed, just full blast, their Border Collies.  I remember so well the Vet telling me to keep Dutchess quiet for two weeks after a visit and I looked at him and rolled my eyes and said sure then he said "give it your best shot, I understand".  We did make it. 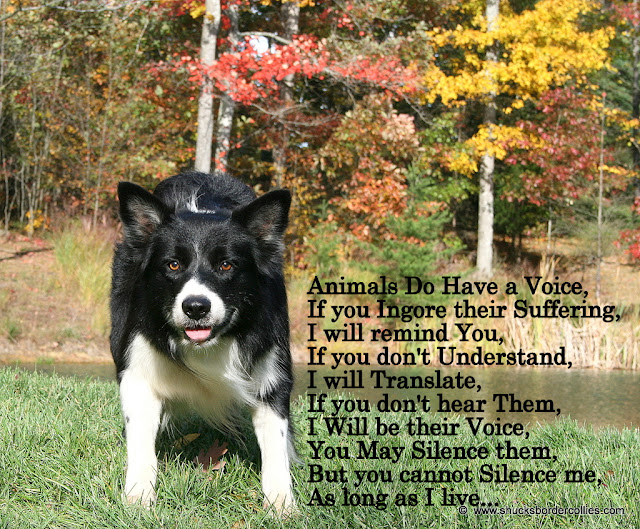 Posted by Dogwood Ridge Border Collies at 8:49 AM