This has been a big day for Molly Mae…Elaine and I took most of her stitches out yesterday morning, they were in for 14 days.  Because I didn't want to release all of her sutures at once, I took every other one out and so far it looks great.  I will remove the rest today.  This has been an ordeal in more ways than one.  We have had to keep her in the house the whole time and keep her “lampshade” on her the entire time because of her constant licking.   It started out hard on her but as time went by; she did much better and became accustomed to it. 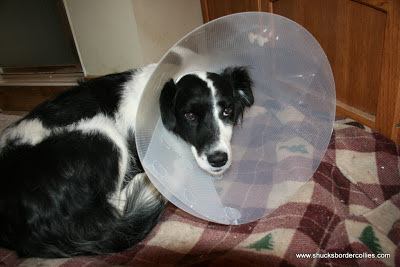 It’s amazing what dogs will do when it needs to be done.  Molly is a little skittish of new things and doesn't do things that are out of the norm for her.  When we first put her lampshade on, she bucked and pulled at it getting it off in just a few minutes.  I took her in my lap and comforted her and tried to make it peaceful for her and she seemed to calm down just a little.  After a while, she walked around for a short time and turned a circle and plopped down and went to sleep.  Molly has always been a great house dog and she can sleep on the bed for hours on end, but as soon as I go upstairs or downstairs, she is right behind me except when she would get her lampshade hung up on the door frame or the stairs.  She learned to just barge through, not stopping for no one or thing.  She learned that if she hit it hard enough, she could bend it and make it fit.  At times, she would push past me, catching me on the leg and almost knocking me down a few times.  She even mastered putting her lampshade over her food bowl and eating, it was so cute.  She came a long way from not moving with it or even going outside to “it’s like she doesn't know it’s on”.  What a girl. 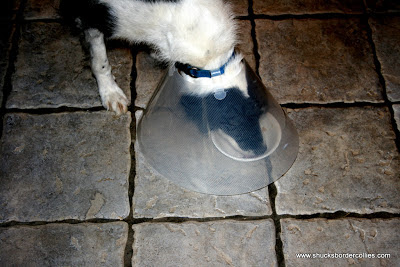 One thing I will miss is her constant companionship and the fact that she is always by my side.  She would stay on the couch or her pallet right at my feet trying her best to nuzzle me with her “cone” on.  It’s a little hard to rub her head with it on, but we managed and she usually got a good head scratching.  In just the next few days, when I’m sure it’s safe to resume her normal activity, she will go back in the rotation with the other dogs that get to come in, but it was nice to spend some quality time with her.   As you know Molly is special to me for many reasons and I will miss her so.  She has always been a little trouper and will do what I wanted her to do.  She became so use to me checking her incision, when I said “let me look at your belly”, she would roll over and raise her leg for me to look.  When I took some of the stitches out, she was a little scared and her leg started trembling just a little until I said “its OK girl” and she looked at me with those big brown eyes and laid her head back down until I finished. 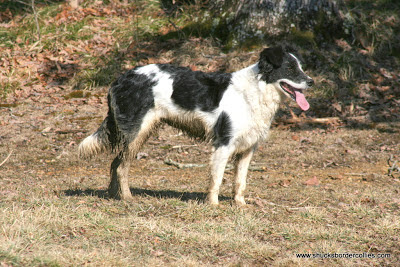 As I said, all in all, Molly is doing great and should be back to normal in just a few short days and I am sure she hates to go back to the kennel every other day or so, Dutchess is thrilled that she is moving out because she wants some daddy time too.  A few nights ago, I brought Dutchess in after Molly and Elaine went to bed.  I went out to the kennel about 11:30 pm and got her out.  We she came in, we had a little snack and watched some TV and then she went to the “ball” drawer and just stood there looking at me, then the drawer and back at me want the ball.  I told her we have got to be quite and she agreed with a bark.  We played for about 30 minutes and she was happy, but much happier when I turned down the covers to the guest bed and got in and called her up.  She snuggled next to me the whole night…Back to normal, I only hope……

Our Dogs Facebook Page
Posted by Dogwood Ridge Border Collies at 7:27 AM