When It’s Yours, It’s Different...

As some of you may know, Last week I had to take Dutchess in for what could have been a serious surgery. Of course anytime any dog goes under the knife it can be serious from the anesthesia, the surgery itself or the post-op conditions and of course, I over think each one. About 10 days ago, Dutchess crawled up in my lap and rolled over for me to rub her belly. She has had trouble with one teat and had a lump on it for several years. Well on this night, it was about 3 times its normal size and had an abscess, all of this happening in just a few days. Well as we all do, I go to the internet and Googled some info and I might as well have signed her death certificate. The internet is always a bad place to find medical conditions because it is always giving the worst conditions possible. I called my friend and Vet in Louisville and he said he wanted to see soon but the only trouble, was he was going out of town the next morning and would not be back before the following Tuesday. Waiting, something I don’t do very well and never will. So here we are, Dutchess jumping around like a jack rabbit and me in the dumps. When I worked for this same Vet, I saw many situations come in and assisted in most of them, but when it’s yours, it’s always different. 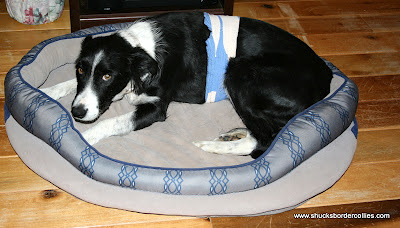 The wait for the day was long and hard. It was always on my mind and not far from my thoughts, always thinking the worst. Many people had talked of cancer and this is just something I didn’t want to face, nor did I want Dutchess to either. So off we were to the Vet and surgery in Louisville about 2 hours away. Traveling with Dutchess is always a treat because she wants to drive. She will try to sit with me and reach for stuff making it hard to watch for things I really need to watch for. Dutchess is one who always gets sick, so I prepared the car for this trip. It actually looked like a laundry truck with all the towels and sheets that covered everything. You see, I have learned my lesson traveling with the dogs before. Once, I was taking Meg to agility and I did prepare a little but just as we were pulling in the parking lot just 20 feet from our destitution, she puked not once but three times with the last one on the console of the car. She just looked at me with those sad eyes and how can you be upset. I even thought ahead by not feeding her that morning which didn’t work.

It didn’t take long for Dutchess to get sick even though I had not fed her for nearly 24 hours. It wasn’t much, but just enough to keep with traditions in the puke-mobile. She was restless and kept going from one side of the car to the other, but we made it.

Once at the Vet, she greeted everyone with jumps and licks and grabbed a new toy from their counter that are sold to pet owners to take home for their pet. She tossed it in the air and brought it to me to throw back to her, which we did. Sorry to the people who bought a used toy, but know it had the Dutchess seal of approval and she liked it.

After a short time, it was time to get started. Because this is where I had worked before we moved out of state, I was allowed to stay with her during the surgery and assist. This is where I feel comfortable and wanted to be and I’m sure Dutchess would have wanted me there too. After the Ketaset (ketamine hydrochloride) injection, it’s off to sleepy land and we’re off. It’s funny to see her jump and bounce around and right after the injection, she senses something is just not right and she comes to me. I get on the floor with her and go with her to that vast underworld, she puts her head in my lap and her eyes are trying to focus on me.  I was right there as she goes on her journey.  She was washed and scrubbed and the area shaved and disinfected.  Surgery packed opened and instruments in the ready with scalpel loaded. We’re off, I have seen this scenario a thousand times… but when it’s yours, it’s always different.  Everything went well… Prayers answered. 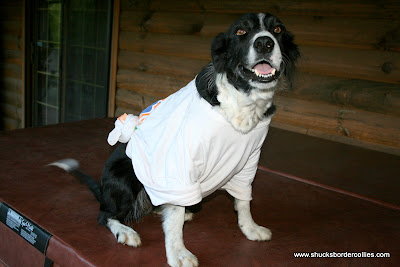 After the surgery, I carried her back to a pre-op observation area, I covered her up and went to lunch. She was in good hands and needed time to wake up. I returned in about two hours and checked on her and she was still very groggy but when she saw me, her tail went in circles even though she could not get up. After rubbing her face she went back to sleep for a few minutes, I'm right here...
Dutchess was ready to come home and so was I, it had been a long day and one I was glad was over. She is recovering well and is in fact recovering too well. To her, she never had the surgery and wants to play all the time, it’s me who puts on the brakes. 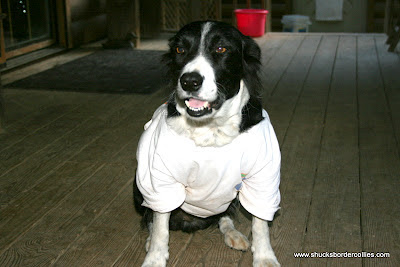 This is Dutchess wearing her "T-Shirt"  It's works much better than a lampshade or a collar and she likes to play "Dress-up". 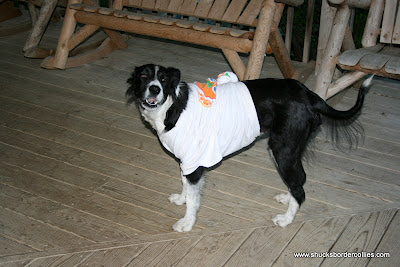 It’s hard for anyone who has not gone through the worry to know how it affects you, but it does. You don’t want your pet to hurt or be in pain. Dutchess is a trooper, but when she was down and out, my heart broke. I have assisted in many surgeries, but when it’s yours, it’s always different. Ken

Posted by Dogwood Ridge Border Collies at 8:42 AM