The Story of the Jolly Ball... Or is it? 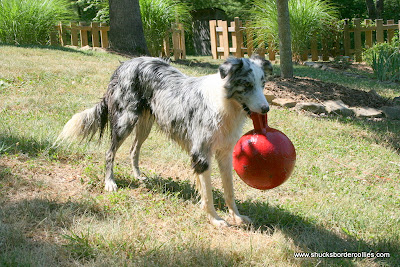 Can you write about a red or blue Jolly Ball and is that the real story? You can write about it, but it’s not the real story, let me explain… A good friend told me about the Jolly Ball when I was complaining about “there is nothing that my dogs can’t bite into and pop, if it has air its history” I had purchases several basketballs only to see them flattened in 3 to 4 minutes. She explained that she has found a ball that will work and it’s great. She and her husband were coming over for a play day with her dogs and I ask if she would pick one up for me, just to be sure I got the right thing. When they arrived with Jolly Ball in hand, I was a little confused because I had seen it in the farm stores and it had a photo on the side of the package with a horse holding a Jolly Ball in its mouth. What does this have to do with dogs? “You’ll see”. After the play day, out came the Jolly Ball and off we went to the water. 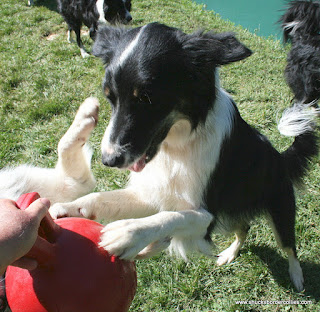 Even before I got to the water, the dogs were jumping at it and trying to get it out of my hands, because they knew it was something fun to do and after much fun and excitement, they were happy, tired and wet. Time for rest, and while the dogs were asleep on the porch, I pondered the latest form of excitement. 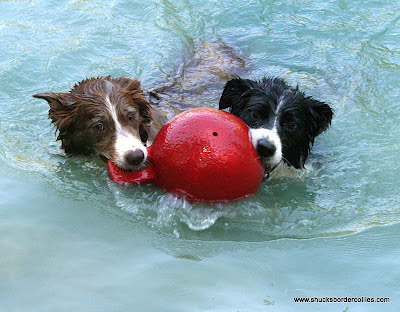 Was it the Jolly Ball that brought so much excitement? Yes and No. As I thought back, I would see all the dogs running up to cars that would visit with their tails wagging and barks of enjoyment knowing they would play with the occupants. I saw Abbie run off the porch when I was nearing the back door because she thought it was play time. I saw Dutchess jump in the air when we would walk toward the lake. I saw Clancy bring a tennis ball and lay it at my feet while I am working on a project and if I ignored him or moved, he would reposition the ball, just to make sure I would see it. Many times all the dogs have brought me a piece of tennis ball, stick, piece of plastic or anything that could be a toy. But the story is, they want to be with us. Many times people will tell me that their dogs are so loving and devoted to them and I know this so well. It’s even hard for me to put on my outdoor work shoes because they will crowd me and shower me with kisses and licks and most of the times if they can’t get in, someone will jump on my back and lick my neck as I sit, trying to tie my shoes.

Is it the Jolly Ball? No, it’s the time they want to spend with me; it’s the bond that the dogs make with "us" humans. So many times we overlook this bubbling love or put it off and this is a shame. I am so lucky that I have time to be with mine which is nearly 24 hours a day. I see them in their excitement and when they are at rest and peace. I have the best of both worlds and I take advantage of it. I have said there is nothing as peaceful for me as I am in my recliner and a dog in my lap. I have had a lot of dogs in my lifetime and in my heart, I believe all dogs are not this way. Some dogs won’t give you the time of day but Border Collies will and will continue to give you their heart. I did a Google search on "Most Loyal Dog breed" and “Entirely Pets" said that the Number 1 Loyal dog is the Border Collie or "The Rough Collie. I know a lot of people will argue this, but I have seen it firsthand so many times. I truly think it’s bred into them because every litter starts the same.

As I approach the pups in their kennel to put them up for the night, I open the gate to wagging tails, little jumps and saucer shaped eyes, I will bend down, get on my knees and will get covered with whines and licks and puppy breath which is the only way they know to talk, but it speaks volumes and who would ever think a little pup with a licking tongue, could say so much.  Last night Meg was with me as I put them up. When I bent down, Meg knew her signal. She too, joined the pups showering me with all the love in her heart and in my heart; I knew it doesn’t get any better. 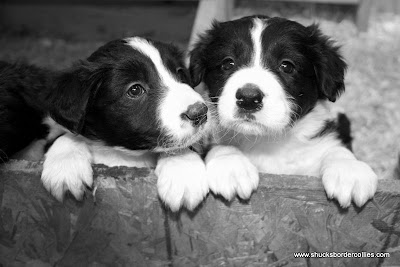 Is it the Jolly Ball? No, it’s the love that overflows from their heart because someone loves them back and the trust that humans and dogs have, but Border Collies have a little extra, I know because I see it every night.

A wonderful quote from the movie "Marley & Me" is so true. This quote came when Marley was at the end of his life and was being put to sleep and it was said by his master whose heart was breaking watching his best friend pass.
"A dog has no use for fancy cars, big homes, or designer clothes. A water log stick will do just fine. A dog doesn't care if you’re rich or poor, clever or dull, smart or dumb. Give him your heart and he'll give you his."

If you haven’t’ give your heart away, try it and it will pay you back more than you’ll ever know. Is it the Jolly Ball? I really don’t think so. It’s a gift we’ll never understand.  Ken

Posted by Dogwood Ridge Border Collies at 8:57 AM