Even though we are just getting into the summer season, we are near the end of the puppy season here at the farm. Dutchesses’ pups have all gone home and some of Meg’s have too with the rest going this week. This is a very bitter sweet time for me because I do enjoy them so, especially at this stage in their life. What I won’t miss is all the hard work that’s involved in raising the pups. Some might think that it’s pretty simple and the Mom takes care of everything and in most cases, they do. There is a point that “Mom” says to the pups, “you’re on your own” and then we step in.
Even before the pups are born there is a lot involved in the process that most people don’t think of, some of the things are taking Mom’s temperature, having the whelping box ready and watching her food intake and general moods which can help in letting you know when it’s time. I try to keep everything ready but they deliver when they want and usually it’s during the night, which means a very long night, once Molly delivered the first pup in the middle of our bed. Cleaning their whelping bedding is something that is a must and should be done on a regular basis for the health of mom and the pup which means doing extra wash every day.


As they grow, the first ten to twelve days are a snap, but as they get older, things get more hectic and involved. Everyone raises pups a little different. What works for me does not always work for others and so forth. I like to have the pups in an area where they can go outside when that want, which means they will “potty” away from their bed and this seems to help when they go home and also cuts down on clean up. Usually the pups are in an area that is about 25 feet by 25 feet and they will scamper all day and have a big time rolling around and playing with each other until they drop off to sleep. But before this happens and as they get older, I will puppy proof the area, making sure they can’t get out of their fenced area. At night, I always enclose the pups inside their own kennel in the big kennel house around midnight (which is a pain when you’re nodding off to sleep on the couch). I do this just to make sure they are safe during the night from any predators that might roam the area and get them and I will let them out at about 6 to 6:30 am. I will tell you, just last week, about 7:30 am, I heard the dogs barking which they usually don’t do, and I went to the kennel to investigate. Annie was herding three pups that had squeezed under the gate and were playing near of the edge of the woods. It was so comical, and trying to catch them was a hoot, but in the end, that could have been a tragedy if things would have happened a little different. It’s like having eight to ten preschoolers at the same time and this spring, I had 14 and was always on guard for problem. 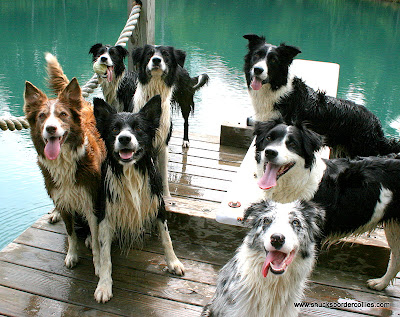 All in all it’s fun and it keeps me busy and as I said, it’s a lot of work, especially if you’re a type of person that wants everything right and strives so the little pups will have a good start, but the ones that get a little slighted is our dogs. There is just not enough time to work with the pups teaching them to play ball and swim and to devote the time that the big dogs are used to.

It is nice to get back to a normal routine again and the big dogs will love all the attention that they deserve to have again. I was thinking about this last night and I called Molly’s name while she was sleeping on the couch and with her eyes still closed, her tail wiggles with joy, just knowing I called her name. Abbie can’t wait to cuddle in my arms during the night and Clancy loves to lick my leg. Dutchess will stand at my chair waiting for me to get a ball and Meg will put her head in my lap while she sleeps. Annie loves to play “dog fight” with me on the couch which is its own story. My dogs and most dogs, are very forgiving and it will be nice to spend the day playing and just being together. This is all normal at our house and I hope every pup will do some of the same things with their owners, they have a gift, and you just need to accept it.
Happy Father's day to Clancy, you deserve your rest, 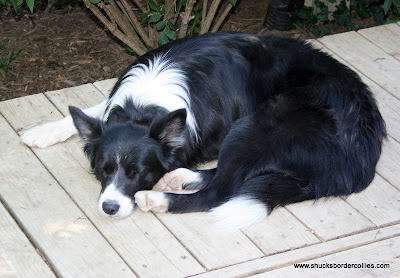 We’ll have to wait and see if Molly is pregnant and if she is, it’s time to start again.

Posted by Dogwood Ridge Border Collies at 8:18 AM