Why is it, that border collies love balls and Frisbees? It’s nothing like their intended job which is herding. The Border Collie is descended from landrace collies,  a type found widely in the British Isles. The name for the breed came from its probable place of origin along the Scottish English borders. Mention of the "Collie" or "Colley" type first appeared toward the end of the 19th century, although the word "collie" is older than this and has its origin in Lowland Scotts dialects. Many of the best Border Collies today can be traced back to a dog known as Old Hemp which was a tricolor dog,  born in September 1893 and he died in May 1902. He was bred by Adam Telfer from Roy, a black and tan dog, and Meg, a black-coated, strong-eyed dog. Hemp was a quiet, powerful dog that sheep responded to easily. Many shepherds used him for stud and Hemp's working style became the Border Collie style. All pure Border Collies alive today can trace an ancestral line back to Old Hemp. I’m sure that “Old Hemp” would not know what a tennis ball or Frisbee was, nor would he show any interest in either. But it still doesn’t answer the question. 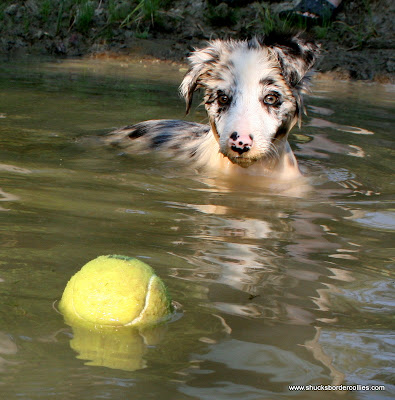 If you have a BC then you know what I mean. Usually when we have a play day, we will play for what seems like a long period of time. Many times people will say “they will do this forever, won’t they” well yes, they will. I once said to myself, “we’ll just see” and off I went with several tennis balls and two Frisbees and walked to our play area ready to solve the mystery. Nearly two hours later I was pooped and the dogs were still raring to go and I quit, I was tired. They won…The question is still unswered. 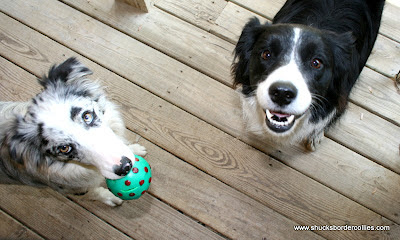 I keep the extra balls and Frisbees in an old gas grill on the dock of our small lake. If I even go toward that area, they go crazy, knowing I am getting ready to get their favorite things in the world. They will spin around and Dutchess will bark while Abbie will give off this high pitched yelp knowing I am going to get the toys. I have even seen Dutchess stand on her back legs and try to force the grill open and if I pass by the “toy chest” OMG you have never seen so many sad faces in your life. You would think I had done a terrible thing and to them I have. But that doesn’t stop them. A friend that attends our church plays tennis. She is a very good player and  will only use the tennis balls for a couple of games and then bring me all the used balls and needless to say, we have them scattered all around the farm.

At the point of passing the “toy chest” the dogs are on a mission to find a ball so we can play, which they usually do. Just yesterday, Clancy found a bleached out ball that had roots growing in the fuzz and I’m sure it had been in a undisturbed place for several years, but it was still round and still had lots of fun left in it and as we usually do, we tossed it, how can you say “no” at that point. Truth be known, somewhere around the farm, there are hundreds of tennis balls in a hollow log just for emergencies.
Most BC’s are typically extremely energetic, acrobatic, and athletic, they frequently compete with great success in dog sports. In addition to their success in sheepdog trials, they  are cited as the most intelligent of all dogs. In January 2011, a Border Collie was reported to have learned 1,022 words, and acts consequently to human citation of those words which is amassing and I don’t know if I know that many, but the most important words to mine are food, Frisbee and ball.
Another thing I have discovered is they like boat rides and if I get in a canoe or on the pontoon boat, they are not far behind. 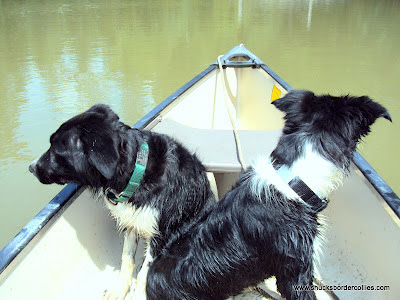 I have been in the canoe fetching tennis balls in the lake and have had a few of the dogs swim to me and of course, I pull them in the canoe getting me wet, but they are happy and so am I, except the wet part. There is never a lack of action on the behalf of a Border Collie. I just wonder what “Old Hemp” would think?
Posted by Dogwood Ridge Border Collies at 7:22 AM