As many know, we have more than one dog, and that being said, I get to see more than one personality in them, and I will tell you they are all different, not good, not bad, just different. Elaine and I also have four children, and children like dogs are different too. Each one has different needs, personalities and wants, and desires. We seem to think they should be the same, but they are not. Dogs are the same in that respect too. Some are needy, some independent, some loving, outgoing, and some are even standoffish. I have often wondered why this happens. I have seen dogs come back to visit all over the spectrum. But I know they left with the same upbringing and personality, and I also think that all dogs start out the same, it’s the human aspect that makes them different. We have a lot of people that visit just to see the dogs and watch them and play with them.
We always come inside the house with the dogs of their choice and play and interact with them. Everybody wants Clancy. He will always put on the charm, jump on the couch with them, and put his head in their lap. Recently, we had a couple come to visit, and he was in between them on the couch, and both of them had their hand on him and was petting him, everyone was content. I saw Clancy’s eyes roll back in his head and he was gone, fast asleep in minutes. In my mind, I know this was his plan to get some attention. Clancy knows how to “butter his bread,” so to speak. But I tell them if you want Clancy, you have to make him, it’s there in your pup, but you have to work at it. I tell everyone that takes a pup home, “remember, whatever you put in, you will get out, nothing more, nothing less” It’s up to them, the fate of their dog is in their hands, it’s that simple.

This brings me to my point. Why are they different? I think when a dog gets comfortable with the owner, and I do think there is only one owner or master, anyone else is a caretaker for them. They take on the personality and traits of the master in a small way. Sometimes we make it too complicated with our “stuff.” They are simple animals, and want nothing more to be lead and loved throughout their life. They look for a leader, someone that is strong and that they know you will take care of them, no matter what. They look to us as the “alpha” in their life. I have seen it time and time again when something goes wrong, the human stops being the alpha, and the dog takes up the position, and this should never happen. Even in their own pack and in the wild, the females will only breed with the strongest male that’s available. We need to be stronger than the dog and be in charge.
As I said earlier, mine are different. Abbie came back to us as a pup, she went to a house with 3 young kids, came back and was re-homed again. Well, the number two home did not work out either. When she came back the second time, we wanted to evaluate her and just see what was going on. After just a few days, Elaine and I looked at her and then at each other. We wondered what had gone wrong. To be fair, the second attempt to re-home her, nothing was wrong, the family had circumstances come into their life that would not be fair to them or to Abbie. Finally, Abbie was now at her forever home, never to leave again, but I do think this whole process had a profound effect on her. 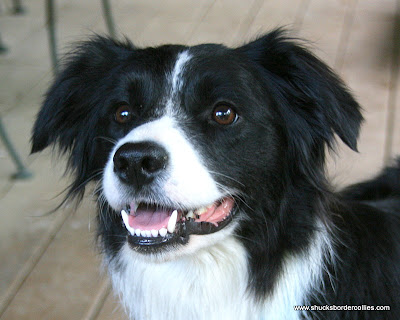 Abbie is, no doubt, my dog. She protects me and tries to keep every dog at bay that comes into my “range.” She will position herself between my legs while I am standing and just watch, protecting me, she thinks from any ill will. She has that Border Collie look and a face that will melt your heart. 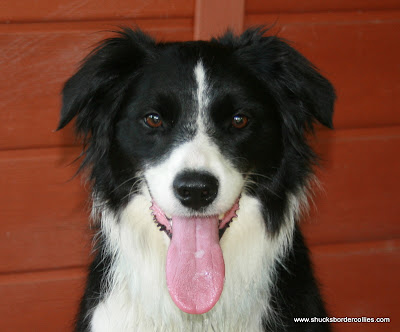 Several days ago, I had most of the dogs up except Abbie. I had just got in the hot tub, and as usual, Abbie got up on a small corner of the tub and stood there looking at me for just a minute. Then she wanted to get comfortable, so she knelt down like a lamb folding both front legs down and resting on them before she curled into a small circle. At that point, she watched me on that very small space that had to be uncomfortable for her, where just a few feet away, she could have stretched out and lain on a comfortable throw. A few days earlier, I was in the family room and had shooed her away because I didn’t want her to be involved in what I was doing. Elaine, knowing I had done this, watched her go to my “fuzzy” house slippers and push them together with her nose. She gathered them between her paws and laid her head on them. Elaine told me later Abbie “just missed you” and wanted to be near you, but you sent her away, and she was crushed. 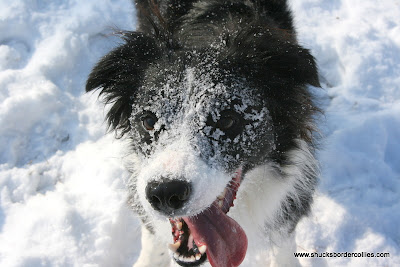 All the dogs want to be near us in one way or another, and the reason I think they do is that, because we have always loved them, touched them, played with them, and included them in the many things we do each and every day. They are a part of our life, and we are a part of theirs. Something that has always angered me is when I hear the comment, “it’s only a dog.” They are correct in that statement, but they are only a dog because that is all “they” made/trained them to be. I happen to want more than that. They are my friend, companion, cohort, and at times my playmate. They make me feel special, needed, and full of life. For the people that say that they have never been loved by a dog. I feel sorry that you have never had that relationship, and you have missed a great deal. I will tell you it is wonderful.  Ken 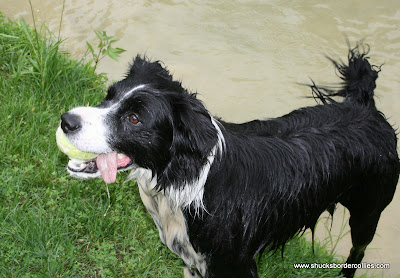 Posted by Dogwood Ridge Border Collies at 12:25 AM