It All Passed Before Me

Sorry for the tardiness. I have been going to Louisville to help my son build a huge outside deck, so my weekends have been a little busy. I nominally write the blog on Sundays, but have been away for the last two.  The good part, I get to see my Granddaughter "Maddie Bear". I have been taking Clancy because two of my dogs, Molly and Meg are in “season” and I don’t want winter pups.

He is so determined to become their best friend, if you get my drift. I remember when we bought Meg; the man we purchased her from was a custom welder. He had a large steel cage that was about the size of a pick-up truck bed. I ask what it was for and said it was to keep his male dog in when his female was in “season”. I said “isn’t that a little over kill? He said he didn’t think so and we went on to other topics. After seeing both of my male and female dogs work to try to get together during this time, I can tell you…..I have ordered one…

Off to Louisville we went. Me and Clancy tooling down the interstate, I would listen to the radio, if it worked, but we were having fun. I worked my guts out and on the return trip, I was tired and going a little fast trying to get back home to the hot tub and my recliner because I was sore and starting to get chilled.

BANG ... was all I heard and then, jerk to the right and then to the left and back again. A blow-out at 80 miles an hour is scary. I shouted to Clancy, “Hold on” or something like that, (it could have been something a little bolder). After much work at the wheel we got her pulled over to the side. I just sat for a few minutes and it all passed before me. 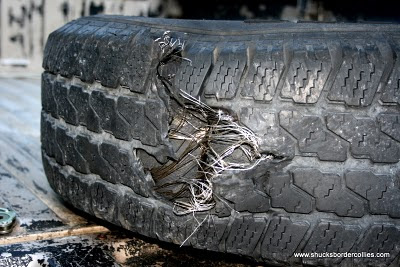 Clancy was concerned, I could see it. He then put his head on my lap as if saying, it’s OK, we made it, and we did, but I was a little shaken. As we sat there, I thought everyone would rush to help us, but I was proven wrong. It was just us, with a ribbon of big steel trucks blowing past us so fast it would shake my truck. Well, I said to myself, “you won’t get it changed if you don’t get out”, so out I went. Clancy wanted out too, and I thought of a nightmare of him running next to the interstate into the traffic, so he stayed in the truck and that was final. My next thought, do I even have a spare? Where is it and do I have the tools to change it? Crap, I should have checked long ago. I had seen some tools behind the seat, let’s hope for the best.
Wouldn’t you know it? It was the tire NEXT to the road, so my butt will be in traffic trying to get it changed. I said to myself, “well if I go, it will be fast and quick and I’ll never know what happened", so I said a prayer and off to fix it I went… So far so good, I can make since of most of the tools and the jack, but I did something I usually don’t do, there were directions and I read them. Is their air in the spare tire? I kicked it and there was some, but it needed a little more. I hope it will do, it will have to. The whole time Clancy watched me work and struggle and there were times I had to get under the truck to get the jack positioned in just the right spot, but we did, and we were well on our way to getting home. You would have thought the big trucks would get in the other lane, but they didn’t. I didn’t look because I didn’t want to see anything coming if it did.
Changed, were done, it’s over; I threw all the tools and parts in the bed of the truck and got in.

﻿ ﻿ We just sat for a minute. I prayed a prayer of thanks and Clancy licked my hand. On the road again. Let’s just hope we can get back in traffic without getting run over, which we did.

I will tell you, there is no place like home….

Maddie is doing well. She and Clancy had a great time this weekend and she can say “puppy” and “pap-paw” and hundreds of other words but I like these two the best. I love her so…… 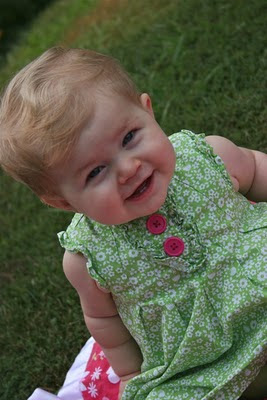 Posted by Dogwood Ridge Border Collies at 9:08 AM