I knew the time would come, and we needed to do it; I put it off because it took some work on my part, and we were getting ready for vacation. Annie (Lil’ Possum) needed to get in the water and swim because it’s just something they need to do. When we got Molly Mae, it was during the winter, and we didn’t know the importance of acclimating her to the water, so we never got her in, and besides, it was winter. Most of the other dogs will automatically get in the water, but Molly is the only dog we have that will not, except up to her belly. 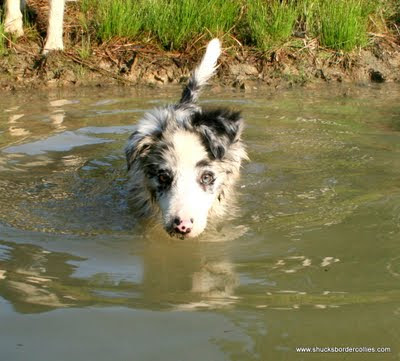 The big day came right before vacation, and it was a hot day, which made it better for me. Elaine and I took her out to the swimming lake because we “were” going to swim. I drove off the diving board and swam around to the shore. Elaine took Annie to the shore where I was, but Annie was more interested in eating the mud than the water. I was in and coaxed her toward me, but every time she got her little nerve up, she would back off. I got a little closer, and she really wanted to come to me but was afraid to take the first step. I would pat the water and call her, and she would hop up in the air and then go the down position. I had my hand just a few inches from her, but still in the water. She was so excited and wanted so bad to come in but was just unsure. She would bark and bite at the water as if she was telling it off. Then I had Elaine throw me a tennis ball, and that did it, not only for her but for the other dogs that had come to observe Annie’s rite of passage. Abbie was the first to snag the ball up, and she was so pleased, but I was on another mission, which was to teach Annie. Thinking ahead, I brought two tennis balls over to the lake, one for Annie and one for the other dogs. Elaine would throw one and keep them busy while I worked to get Annie in the water. Things worked well except for the few times that Abbie wanted both tennis balls in her mouth at once, which she has. Elaine kept the other dogs busy, and the plan was working well. 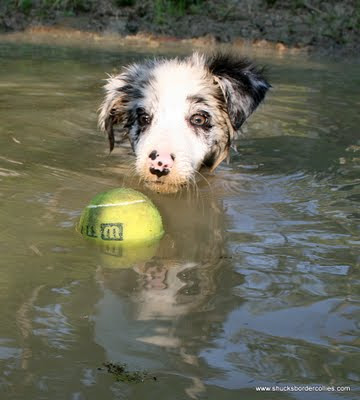 Off the shore she sprang, she hopped once and came straight at me. Her eyes were as big as saucers and not a blink in them to be seen. Right to my arms. I turned her around and sent her to shore for another round. She did it again, and right back she came, to her “safe” spot, but this time she ventured out just a little more toward the dock, not the shore, as before. She ventured to her tennis ball that I had in my hand, wanting to play. This went on for a few minutes until she was comfortable with the water. The only problem was trying to keep the other dogs from jumping on Annie and me to get the ball, but Elaine did an excellent job. Lil’ Possum is officially a water dog and has started her journey to be one of the pack dogs. 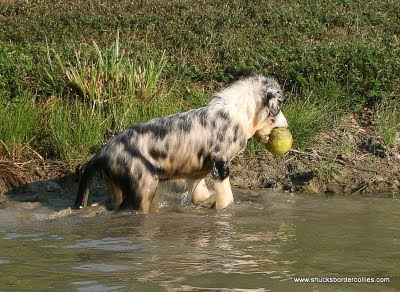 Posted by Dogwood Ridge Border Collies at 10:50 AM