Well, I knew the time would come, I regretted it coming, and I have had many sleepless nights wondering when it would happen, and it did. It happened in an instant and without ANY warning. Like a shot in the dark, a thief in the night, no warning sign, no build-up, nothing.

When it did, the look on their faces was distressing, there was the look of pain, panic, shock, bewilderment and a sense of loss went through the entire pack like ducks on a June bug. Abbie ran in circles, clutching the ball in her mouth for one last time, knowing the end had come. Meg just looked shocked and glassy-eyed.  Dutchess, in my heart, I thought she was going to just "pass out" from grief. Molly put her paws over her head and wept. Clancy, trying to stay strong, tried to keep his emotions together.  He would attempt to comfort the girls, but to no avail, it was a lost cause. He went to the woods to reflect, I'm sure he wept, but no one saw him.  Even little Annie had problems, "Is this what it's like here?  I don't like it here" It was over, finished, no more, and, the end has come. The reaper was among us.

Elaine was out of town, so I couldn't gather her thoughts and help. She is so soft-hearted and knows just the right thing to say and do.  Nope, I was on my own with this.

Everyone slowly went toward the house, I have never seen so many long faces hanging toward the ground, Oh My, Oh My.  As I have said so many times, What to do, What to do…….

They put themselves in their kennel.  There is no joy in Mudville, No hope.


The "tennis" racket used to hit the ball finally broke, and their world just fell apart, because it was such a large part of their life.  It had been used a thousand times to hit a million balls. As fast as I could drive, I went "Code 3" to Walmart and purchased a new one, thank God they had one in stock.  I got kisses and licks for days, I was their hero.   Off we went to wear the new one out.   Life is Good... Annie fits in just fine.  She loves to explore and tries to keep up with the big dogs, but she just can't. "Hope", one of our pups was staying for a few days, and they became best friends.  They would play and play and roll in the dirt, they had a blast getting into trouble. 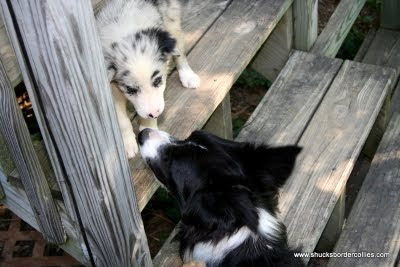 This was Elaine's favorite flower pot.  She had "Hens & Chickens" in it.  The only problem, Hope, liked it too.  Hope won! I'm kinda glad she did it, I never liked them.  Now we can put something else here... 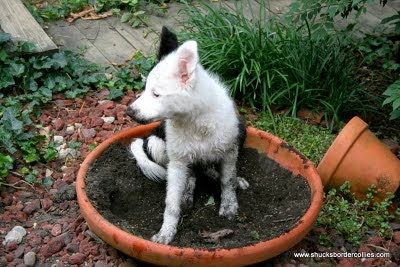 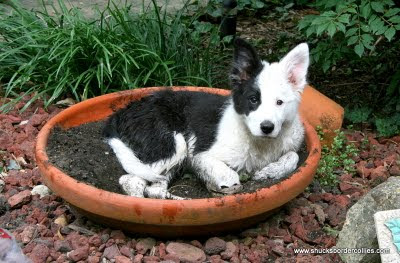 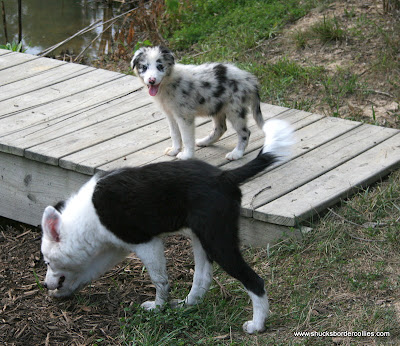 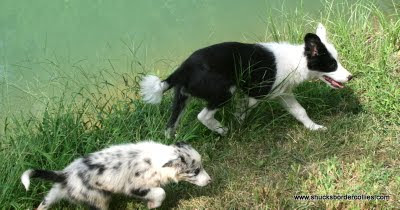 Posted by Dogwood Ridge Border Collies at 11:38 AM