What do you think.......Destiny or Divine

We get about 6 to 8 calls a week, wanting information about our dogs and lots of general questions about border collies. Most of the time, they are from our pup owners, but some just saw us on the web and will call. If you have ever talked to me, you know I love to talk about border collies, and I don't mind. Sometimes it's about things they do or won't do, and I will help as best as I can. I will sometime research it or talk to a good friend of mine who is a Vet where I once worked after I retired. I make it clear I am not the expert, and I will never give advice on a problem that should be handled by a Vet, but I have, as you might say, some personal experience.

Last week, I received a call from a man who was looking for a border collie. He explained he had lost his dog a few weeks earlier, and he was pining for his pet. He asks the general questions about ours and when we would have a litter available. I could tell he was pretty disappointed that we were not going to have any until spring. He was leaving for a family vacation in a few hours and was driving south on the interstate and wanted to stop and see our dogs because we were close to his destination. He was searching and hurting and was on a mission.

When they arrived, he went on to explain that he had to put his beloved pet down two weeks ago because of a medical problem while the dog had "a perfectly good mind." I could hear the pain in his words as he spoke and knew the heartache he was having. He loved "our" dogs but said, "I'm sorry, I just can't wait." as he was leaving.   I knew his heart was breaking, and I wished there was something I could have done. But there might be….Just that very morning, I received an email…

My name John and I bought a Border Collie in November of 2009, and he has been the greatest dog and friend I have ever had. He is certified with ABC. He is the smartest dog I have ever met, and it has been a joy training him. He knows a ton of tricks and is a great Frisbee dog. I am going away to school in St Louis and found out that he will not be able to live with me. I want to find him a truly exceptional home where he gets all the love he does from me. I am very saddened by that I have to give him up and was wondering if you would be interested in giving him a home or if you know somebody that might be willing to. He has been such a great friend to me, and I am dedicated to finding the best possible home for him. Please let me know if you think you can help in any way or know somebody that can.

Thanks for your time, 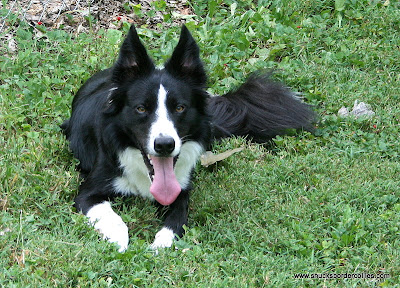 "Or if you know somebody that might be willing to help." This flashed into my mind. I will always help in rescue or help to find a border collie a good home, even if it's not one of mine. I mentioned it in passing to the man, who came to visit, but there was a lot of "what if's" and things that needed to work out, but it was left open.

Well, it did work out…" Jeter" came to our farm and was re-homed to this man, whose world fell apart just two weeks ago. Jeter will be living with a family on 7 acres and a pond. His new owner is also an experienced dog trainer, and he loves border collies. 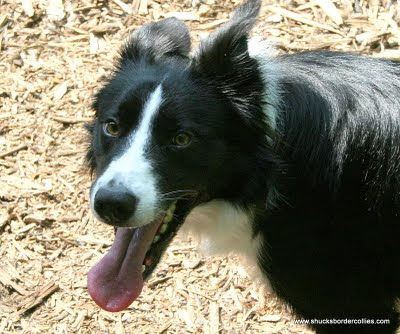 After I had talked to the original owner, he wanted a few days to be with "Jeter" before he brought him over. They spent time together and did just "guy" things. When they arrived, he had brought all of his toys, blanket, and even his Frisbee's, so he would be happy and have all the comforts at his new home. We played a little while he was here but it seemed that "Jeter" sensed something. When the time came to say goodbyes, everyone was emotional, even me, because I have been "here", while the car was pulling away, Jeter didn't understand and wanted to go. I took him to the porch and sat with him and stroked his face and tried to comfort him, which I did. My mind flooded with visions of my "Shepp" on this same porch doing the same thing, just before he left for his "new" home.  I can still feel his fur and see his beautiful eyes, right before he gave me a big kiss, and then my "Shepp" left for good.

Jeter did go to his new home today. His new owner is a wonderful man who loves dogs. When he arrived, he worked with Jeter to get his trust, which he did. It is going to take a little time for both of them because their lives were turned upside down in the last few weeks, but I know both will get straightened out very soon. Although the owner wanted to pay for any expense that had occurred, for me, just knowing that everyone is happy, is payment enough. I explained that "I do it because I love them." 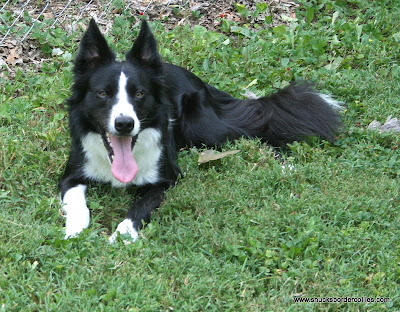 It makes you think this was meant to be. I'm just glad I could be a small part of it.  Destiny or Divine?  Life is Good, God is Good…. Good luck, Jeter. Ken

Posted by Dogwood Ridge Border Collies at 2:12 AM