Summer Camp, and It Always Happens......

It’s always the same, a dog will come over to stay with us and he or she will be in surrounding that they are not use to. All of our dogs will welcome them with open paws, even Abbie who will at least run between my legs and protect her position there for a few moments. This week, we had Kevin Clancy (Named after Clancy) come to stay. 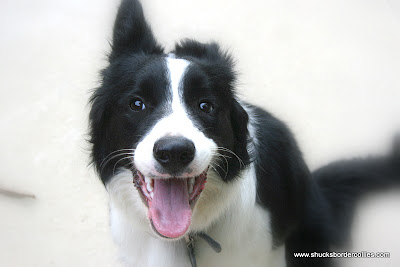 Kevin is a wonderful pup who is not even a year old. He is a beautiful dog who actually seems to smile and have a good time. He was a little shy at first but fit right in. He had come for a "play day" before and he was a little skittish about getting in the lake. As his parents were leaving for vacation, they were wondering if he would get in the water. Well let me tell you.....
He and Keely (another guest) became fast friends. He was a little shy at first but they soon would run together and bark and "play" bite just haveing fun. The first night after playing hard, he fell asleep in my lap, then he slept in the recliner beside me and lastly, he went to the couch. He was worn out.
The next day, they both started getting in the water. Kevin was a little slow to venture very far out, and he only liked it when he could touch the bottom. This changed very soon….

We went to our big lake where the diving board is.  He saw the other dogs jumping off the diving board. He wanted to get in sooooo bad he was whining. I swam to the shore and got real close to the bank and he would almost come to me. He could taste it, but he was just a little scared. Once he made the plunge, he was in, he swam to my arms, his safe place. He got as close as he could and I held him tight and told him he was “OK” 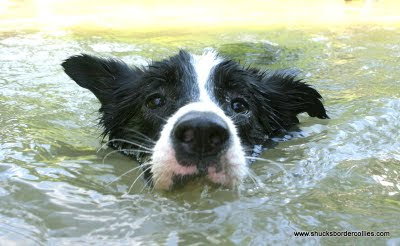 He was happy as can be.  He started swimming and biting at the water and would put his whole heat under the water. 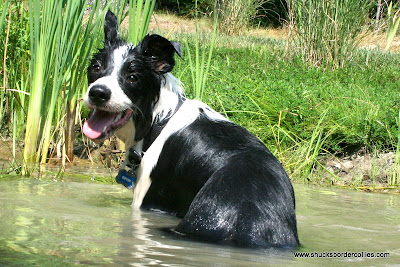 Then the big test came.  The other dogs would jump off the dock and the diving board, so he wanted to do it too.  I got on a raft and swam about 10 feet out in front of him.  He started whining again so I knew he would do it.  He would pace and pace and try to reach down and touch the water but it was too far.  He didn’t know what to do, but he just knew he wanted to jump in.  “If everybody else can, then why can’t I”.  I would call him and pat the water and say “Good Boy”.  After much thought and whining, “Splash” he jumped…He went all the way under the water and came up like he was drowning.  He was paddling as fast as he could, but in circles.  I got him on the raft and he licked me all over my face as if to say, “Thanks for saving me……..I did it,   I did it, I jumped in!”  I pointed him to the shore and as fast as he could, he ran back to the side of the dock and “Splash” back in he came, but this time he knew he was OK and right back to shore.  This was repeated many times and we all had fun.  There is doubt, Kevin James went home a different dog...... 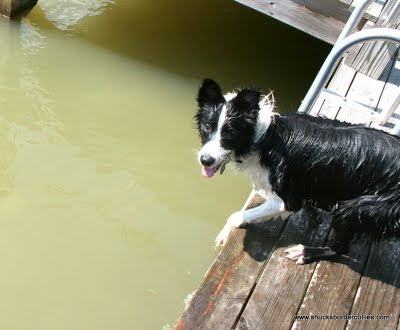 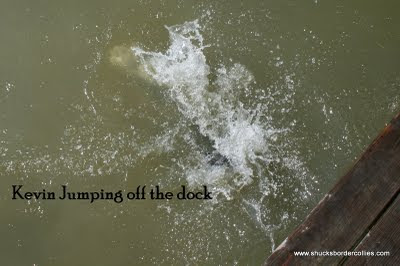 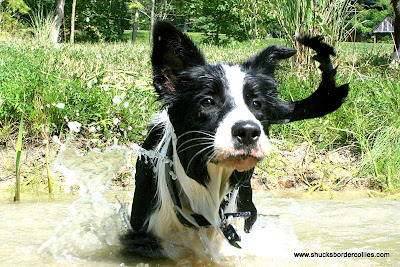 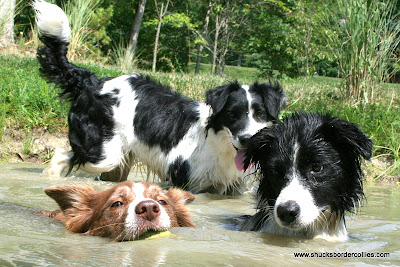 Meg is swimming to me with a ball wanting to play, Abbie has a close eye on the ball, just waiting for it to go somewhere, and she wanted to be ready.  All in all, we had a wonderful day, which was repeated every day because of the heat.  The only injury was when Abbie rolled the ball off the diving board right next to me while I was in the water.  Clancy jumped in, but on top of me, to get the ball.  I will tell you, when a dog weighing 40 pounds hits you from 4 feet off the ground, it's hurts.......Thanks Abbie
Posted by Dogwood Ridge Border Collies at 10:08 AM