I guess it all started when we brought Meg home.  Everyone said that they loved her color and her ears.  When people would come over to see the dogs or to pick up their pup from another one of my girls, I would hear "remember to call or email when Meg has pups, we would like to have one".

This is Meg's second litter.  Her first, Clancy was the father because Shepp was too young and the pups were Black & White.  Well Shepp has grow quite a bit and he has matured somewhat, but he is still "unproven".  But the fact still remains, there is a lot of interest and so much anticipation with this litter.  I will tell you, It has made me an old man.  She stays in the house most of the time and I will check on her often, rubbing her belly and saying, "I know girl" which I really don't, but she likes to hear it.  Meg is a sweetheart.  Every day when she is outside, I look for her just to make sure she is OK and not having the litter somewhere.  Dutchess did that once, she went in the garage and had the first three in the cat bed.  We scooped them up and went to the whelping box and everything was fine.

This has made me ponder some thoughts on anticipation.  There is no doubt, I have a type "A" personality.

What Some Experts Say
Since researchers started studying Type A personality over 50 years ago, it’s become a household term. Most people now know that Type A personality characteristics have something to do with being competitive and work-obsessed, and can bring an increased risk of health problems, but it’s not always understood exactly what traits constitute “Type A Behavior”, or exactly how these traits impact health and wellbeing.


While the term “Type A” is thrown around often, it’s not always fully known what specific characteristics make up “Type A” personality, even among experts. For example, some people, the term applies to rude and impatient people. Others see workaholics as “Type A”. Many see competitiveness as the main characteristic.

Actually, when I Googled it, it kinda scared me because it fit.

It's hard for me to be patient.  When I do things, I want them done now.  Many people will wait for months for a pup, I don't think I could do that, I want things NOW!  Even though I am retired, I get up at the crack of dawn and start moving.  I would love to sleep in.  The only place I can find total relaxition is on a Cruise.  I will take a nap and relax.  It's probably because I am trapped and can't do anything else,  I do relax there and it's enjoyable.  I could never play golf.  I would be thinking what to do when I got home.  It's actually a curse.

Meg's due date is this Tuesday, so just a few more days and we'll know if Clancy climbed over the fence...He likes his girls......

I do get emails wanting to know how Maddie Grace is doing.  My son and his wife, Angie, came up today and they spent some time with us.  Maddie is 5 months old today and she has learned to make razzberries.  She really lit up when she saw her Pap-Paw. 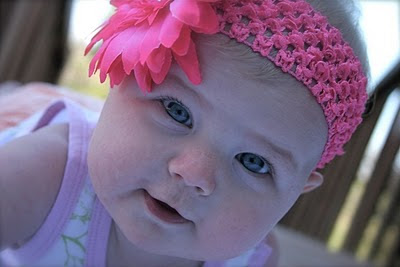 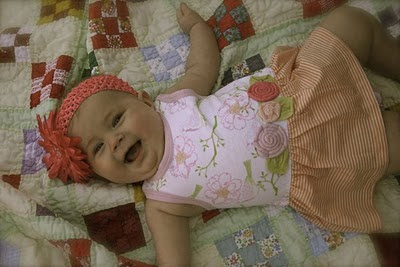 This blanket that "Maddie Bear" is laying on, was made by my Mother who made it for my son, who is Maddie's father, she was a quilter.