Guess What I Can Do 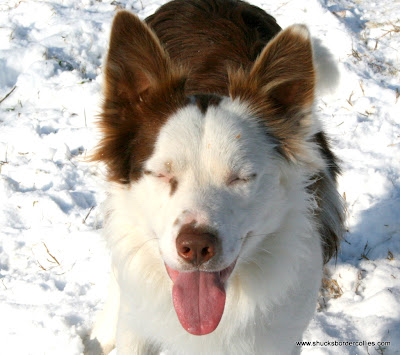 Shepherd James is a Dog, not a puppy anymore, he is a man dog﻿.  He be "DA-MAN"...  My little boy has entered the responsibilities of being a dog father.  Light the candles and put on the soft music (really not needed) he made the plunge this week.  A little friend came to visit for a week to be his companion for fun, fellowship and ultimately a family.  Her name is Peyton.  She is a very beautiful young lady with the charms to stop a 1000 ships.  She took right to Shepp and to our home and became part of our family for a week.  She stayed in the house most of the time and slept in our bed.  She was a pleasure to be with.  As ours are, she loves to play fetch, and like Dutchess, will go and find a ball and drop it at my feet. 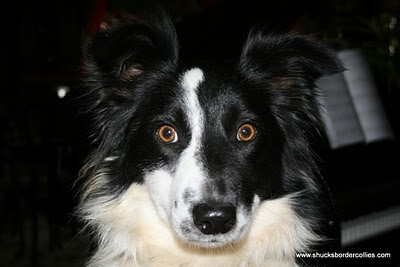 Good Luck Peyton, we miss you and will see you in about 63 days to see your new little family. 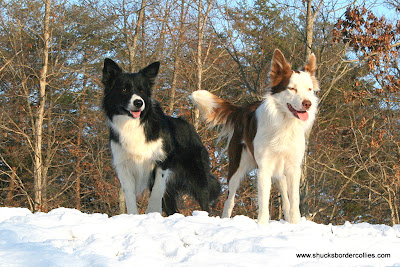 Both Clancy and Shepp provided "service" this month.  Clancy was bred with a beautiful young lady from Kentucky.  Her name is Windy.  She was a little shy at first but soon became part of our family, laying in our lap as we watched TV and running with the pack.   Windy reminds me a great deal of our Molly.  She has the same temperament and both have curly hair, which is beautiful.  When Windy left, Elaine and I looked at each other and at the same time said 'Wonder what Windy is doing?"  We laughed and knew she was fine, also knowing we will see her again in about 63 days.  Good Luck Windy Girl, see you soon..... 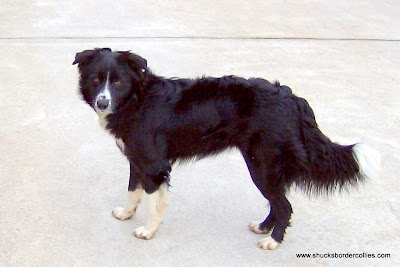 Before I had dogs, I thought the breeding process was just a quick lustful thing that happened on the spur of the moment.  To my surprise, it is a very well planned and orchestrated process that can take up to 3 weeks.  They will court each other, clean each other's face, ears and even paw each other in a playful way and prance around.  It is always the female that will allow and initiate the act.  As I have said before, it is a wonderful world to be involved in. and it is much much more complicated than one might imagine.
Posted by Dogwood Ridge Border Collies at 10:13 AM Links to this post

It's Never Too Cold To Swim

It was just a few days ago that the lake thawed out.  With the few days of warmer weather, we now have water and not ice.  Well as usual, dogs being dogs, they wanted to play ball and Frisbee.  After just a few throws, in the water they went and they didn't seem to mind. 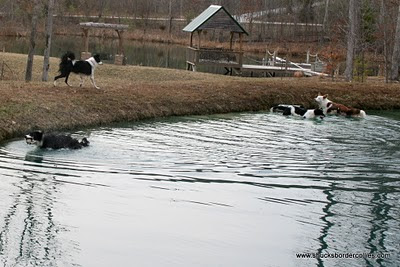 Everybody got in the picture and jumped in the water, not to cool down, but just because it was there.  Everyone had fun. 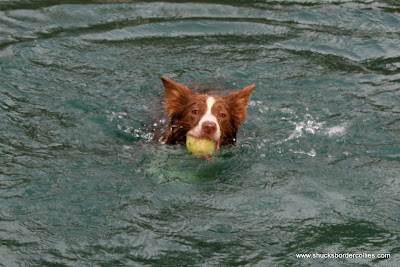 They seemed so quick to get in, I guess it's because they wanted to catch up on the "lake jumpin" they missed.﻿ 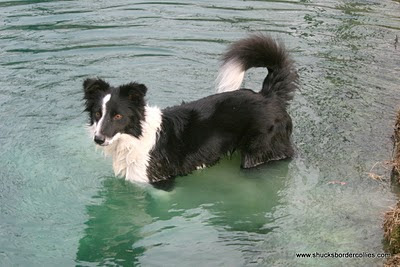 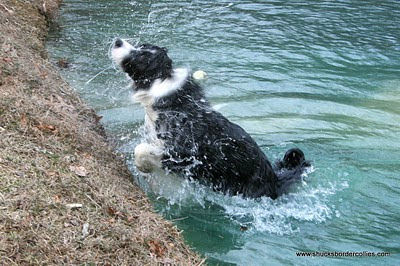 ﻿ I did not throw toward the water, they just did it on their own, and kept going back.  I will tell you when they shake, and it's next to you, it's cold.

﻿
An update on the Dog Bath.  It works Great.  It is built very well and it is larger than I thought.  It is well worth the money.
Posted by Dogwood Ridge Border Collies at 12:41 PM Links to this post

Guess who is NOT coming in tonight...

From February 13, 2010
What to do with a dirty Border Collie.  Today it got above freezing for the first time in a long time.  I like it better when it is dry, or the ground is frozen, and I'm sure you know why.  The is nothing worse than a dirty dog.  With all the running they do, they kick up mud on themself and whoever is behind them, as they run.  Not only do they get muddy, they dig a rut in the dirt around the farm you could plant corn in. 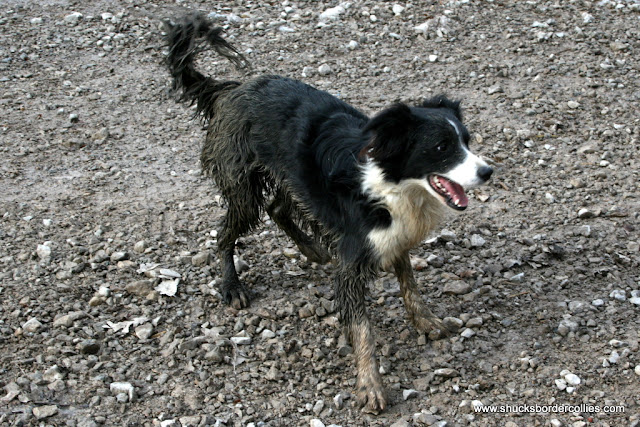 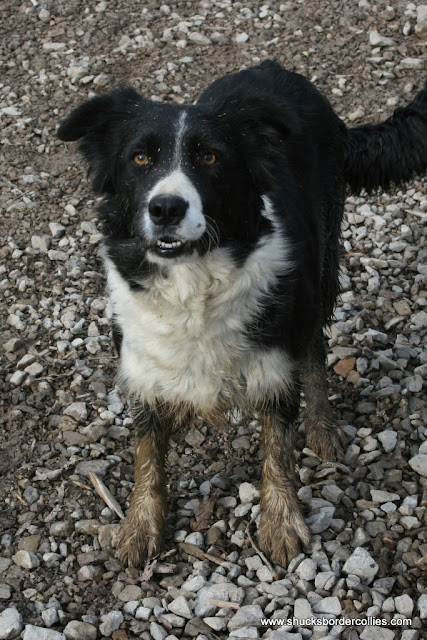 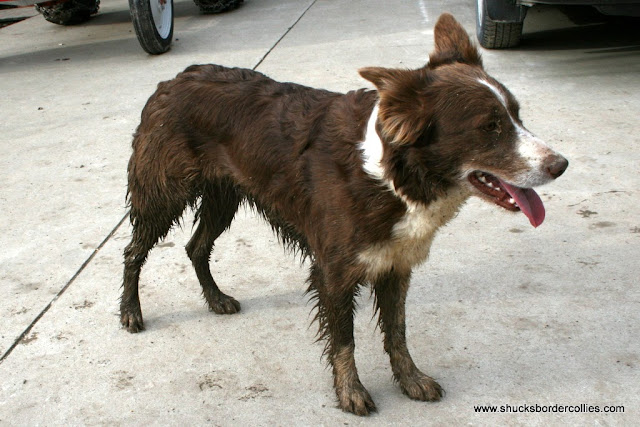 Meg is just as dirty, you just can't see it because of her color.  She and Abbie will run neck and neck and it looks like they are a chocolate blur. 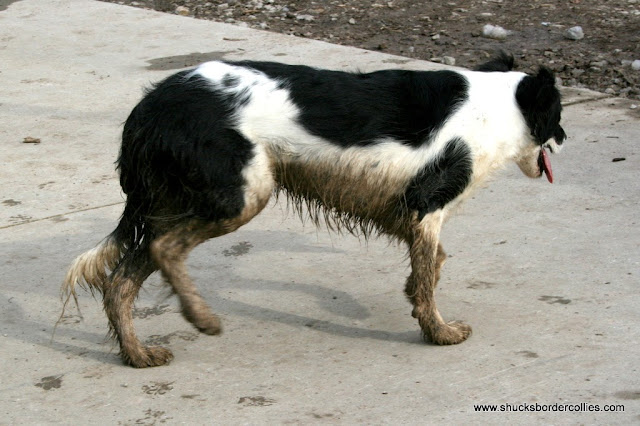 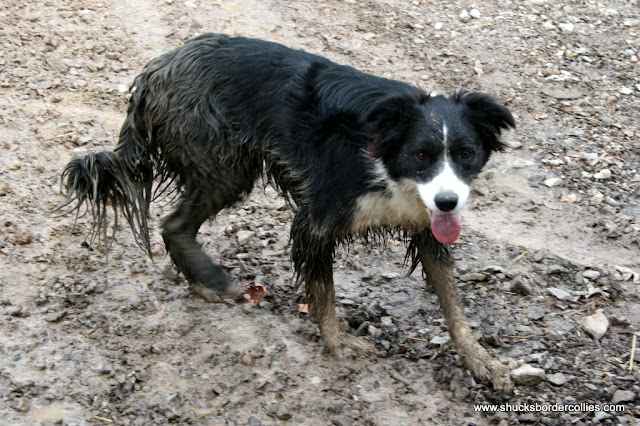 Last week I cleaned out the utility room in the basement and because I have water and a drain there, it would be a good place to give them a bath.  If I only had an old bathtub﻿ to use.  When I worked at the Vet's office, the groomer had one, and it worked great.  Now I'm on a quest to find one, so Craig's list, here I come.  Well I did find one, but for $150.00, NO WAY.  I was thinking in the area of $20.00, and who would use an old bathtub that a stranger had their old smelly butt in, for their actual bathtub.  Well needless to say, that idea was out, and I remembered God created "GOOGLE" I use it for everything.  I just type in a question and "boom" here is the answer.  I even use it for a dictionary.  Just open a tab and spell the word.  I will try it and it will even suggest; DID you MEAN XXXXXX,  Well yea, that's what I meant. 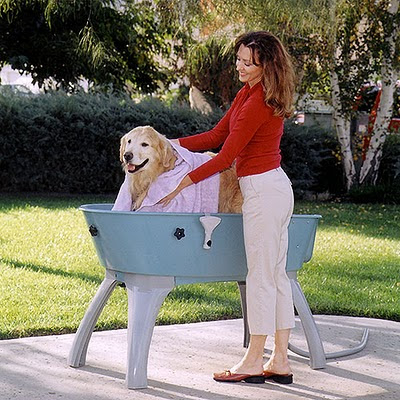 ﻿﻿This should be a piece of cake and I'll let you know how it works.  I'm excited....
Posted by Dogwood Ridge Border Collies at 2:24 PM Links to this post

Reflections and a few Wrap-Ups

This has been a very different week.  All the dogs are fine, I did see a drop of blood on the driveway and I'm sure someone has cut their pad, which happens more often than not, nothing major.  Pups might be on the way....More Later

As most of you know from a past post, we have a Hot-Tub.  I do enjoy it and will use it at least 4 or 5 times a week.  It's good for a number of ailments and also a good place to sit and talk with the little lady.  Today about 2 PM, I decided to sit and relax for a few minutes and chill out.  The dogs were sitting over on the side porch, so things were calm.  This has been a bad weather week, except today.  Most of the country had ice and snow and more ice and snow is due to come in this weekend.  It was a very sunny day today and while I was sitting, I noticed a Robin sitting in the crab-apple tree eating berry's.  It came to me, that as hard of a winter we have had, spring is just around the cornor.  I started thinking of things that I need to do as soon as the weather brakes and I'm excited.  I have planed my garden out and landscape projects are on paper.  It was just nice to see things in the sun again and see the robins...

My oldest son left for one of his Alma maters today, he will give a speech tonight and then fly over to London, England for a week of speeches there.  It just seems like yesterday we were playing Army in the sandbox in the backyard, I guess I now know why he was the General.  We both have traveled a lot of roads, some bumpy, some hilly and while his has been mostly straight, mine have been a little more bumpy and hilly.  God speed, Brad, your in my prayers.  Daddo
﻿
﻿
﻿ ﻿
This is a bad time of year for the dogs.  They want to be outside soooo bad and then they want to come in.  Well when they run, they sling mud on each other and all over their legs.  Even if you wash them, they will be as muddy the next day, it's never ending.
﻿
﻿ To the relief of many people, I got a hair cut. I had let it grow for about 14 months. I went to bed and it was fine and when I got up, my first thought was, I'm going to the barber today, so it's all gone, just thought you might want to know.

Everyone said "you look so much better"  I didn't know I looked so bad.  Why didn't someone tell me........
Posted by Dogwood Ridge Border Collies at 7:12 PM Links to this post